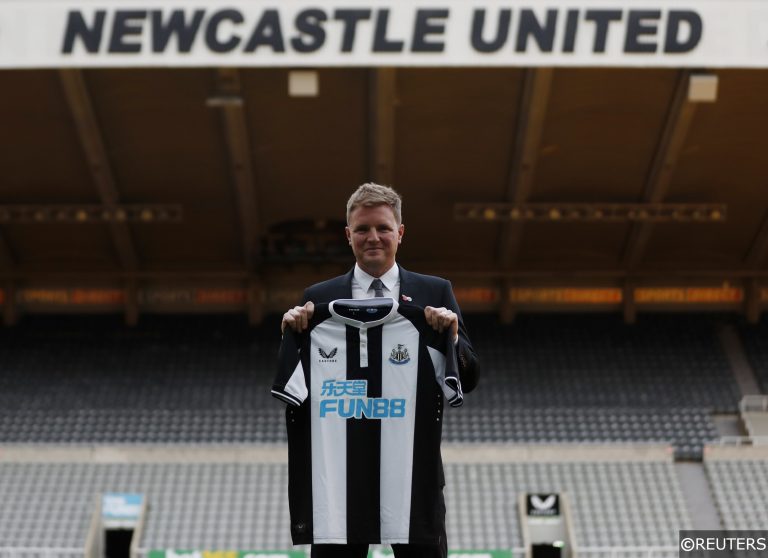 The project at Newcastle following the takeover is perhaps one of the most interesting subplots in the Premier League narrative right now after they instantly became the richest club in the world.

The man picked to take us through the next chapter in Newcastle’s history is Eddie Howe, who was appointed as the new manager at St James’ Park earlier this week.

We’ve asked the Racing Post’s Simon Giles to put together the facts and figures from Howe’s time in charge of Bournemouth to give us some idea of what can expect from his tenure at Newcastle.

Meanwhile, bet365 are running a few markets on what Newcastle may, or may not, achieve next season and you can see some of those odds below too.

Eddie Howe was once seen as one of the brightest prospects in English management having taken Bournemouth from the foot of League Two to enjoy five seasons in the Premier League. It ended on a low following their relegation in 2019-20, but what can Newcastle fans expect from their new boss?

As the above table shows, Howe’s first couple of seasons in the top flight saw his sides punch above their financial weight.

They were just 5/4 with the bookies to be relegated straight back to the Championship in 2015-16, and had the lowest value squad in the division according to figures from transfermarkt.co.uk, but they were never in a fight for their survival, storming 13 points clear of the drop zone with eight games to go before finishing 16th.

Things got even better the following season, when Howe’s 19th most valuable side came out towards the top of a congested mid-table to finish ninth.

As expectations rose, so did the budget he had to operate with, and it is his record splashing the cash that is one of the biggest question marks people have against him before he presumably gets to open the cheque book on Tyneside.

This meant that they had accumulated the 12th most valuable squad by the time they were relegated, with the likes of Dominic Solanke, Jefferson Lerma and Jordan Ibe not producing the output their price tags demanded.

Howe was praised for his progressive style of play, but the defensive records of his sides is another potential area of concern for the Geordie faithful who’ve seen their side ship an average of 2.2 goals per game so far this season.

Fixing that would provide the quickest avenue to turning things around at St James’ Park, but Howe was never able to change Bournemouth’s leaky tendencies, with the Cherries ranked =18th, 16th, 17th, 18th and 18th in terms of goals allowed each season under him.

The flip side to that was that they were more than the sum of their parts going forward, ranking 12th, 7th, =9th and 7th in goals scored in their first four years in the Premier League, but when they finally ran a bit colder in front of goal in their relegation season (ranked 14th), they didn’t have the defensive solidity to fall back on to and grind out results.

The margins in the bottom half of the table are very fine, and they can be considered slightly unfortunate to go down having finished 15th in expected points despite an injury-hit campaign.

Ultimately, if you manage enough seasons in the lower half of the table you are likely to experience both sides of injury luck and close-game variance, the problem being that the lower end of that equation puts you in the crosshairs of relegation.

A recharged Howe deserves the chance to prove the outstanding early body of his work on the south coast is a truer reflection of his abilities, but needs to hit the ground running and use home matches against Brentford, Norwich and Burnley in his first four games to close the gap at the bottom of the table.

In The Mixer: Experts have their say on Conte and Howe