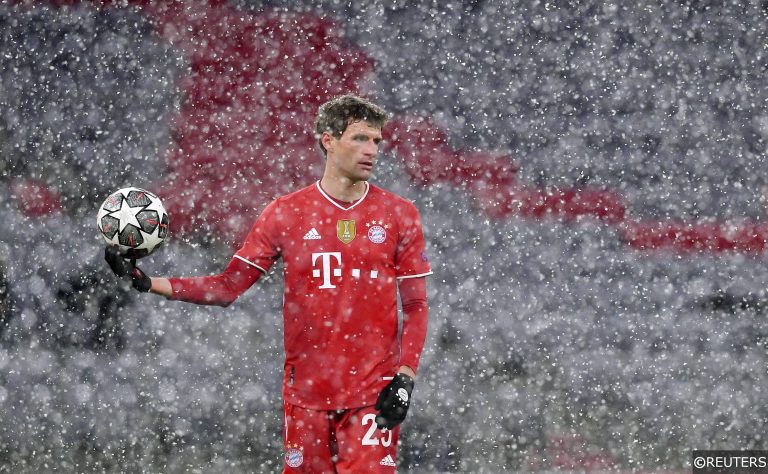 Bayern Munich’s tussle with PSG in Germany last week had supporters across the continent purring after two of the Champions League’s heavyweight contenders engaged in a thrilling slugfest at the Allianz Arena.

The Parisians emerged from the ding-dong battle with a 3-2 first-leg lead, despite racking up just six attempts to their host’s 31 – and Bayern’s incredible chance-creating potency suggests that the tie remains in the balance ahead of Tuesday’s return fixture in the French capital.

With so much drama in store, this week’s Quarter Final throws up plenty of multi part and bet builder selection potential, and we’ve compiled some betting tips for the game with that in mind.

Check our tips out alongside our 13/1 bet builder acca below – and remember – you can read our detailed preview of the game in our PSG vs Bayern Munich predictions.

PSG counter-punched their way to glory in Munich, though they were a little fortunate to claim a victory having been on the back foot for much of the contest.

Indeed, Bayern’s defeat was their first loss in 20 Champions League fixtures, but with injuries issues mounting, their record could be blotted again.

Robert Lewandowski’s absence is crucial, though a number of other key players in Hansi Flick’s side are nursing knocks ahead of Tuesday’s contest, and PSG should be able to avoid defeat against their weakened opponents to book their place in the semi-finals.

Bayern Munich haven’t failed to score in a Champions League match since a 0-0 draw with Liverpool at Anfield in February 2019, while PSG have notched at least once in 43 of the 44 games they’ve played in the competition since April 2016.

Both clubs rank among Europe’s most prolific teams, and having swapped goals and traded blows in the first leg in Munich, it would be a huge surprise if both PSG and Bayern didn’t impact the scoresheet in the return fixture.

Bayern and PSG’s showdown in Munich was a sublime sporting event where both teams went on the hunt for goals, and a similar display of exhilarating attacking football is on the cards in Tuesday’s second-leg.

The Bavarians’ Champions League matches are averaging a staggering 4.0 goals per 90 minutes this season, while PSG’s games in the tournament have produced 3.4 goals per fixture on average.

Bayern have a first-leg deficit to overturn, and Hansi Flick will send his team out to chase a result from the off on Tuesday. That gung-ho approach will open up numerous opportunities and spaces for PSG to exploit, so expect to see the action flow from end-to-end again this week.

Kylian Mbappe has been a one-man wrecking ball in this season’s Champions League and the French wonderkid has torn defences to shreds with his devastating speed and lethal finishing.

The 22-year-old bagged a stunning hattrick in the last round at the Nou Camp against Barcelona, and Mbappe followed up that inspired performance with another match-swinging brace for PSG in Munich last week.

The Bavarians found Mbappe’s searing pace impossible to handle at the Allianz Arena, and the World Cup winner is worth backing to punish the German champions again on Tuesday.

With Robert Lewandowski sidelined, Thomas Muller seemed to shoulder more chance converting responsibility for Bayern against PSG last week, and the seasoned campaigner racked up more attempts (five) than any other player on the pitch in Munich.

Muller found his range with three of his five efforts, scoring once, and the veteran raumdeuter will hope to make a similar impact in Paris.