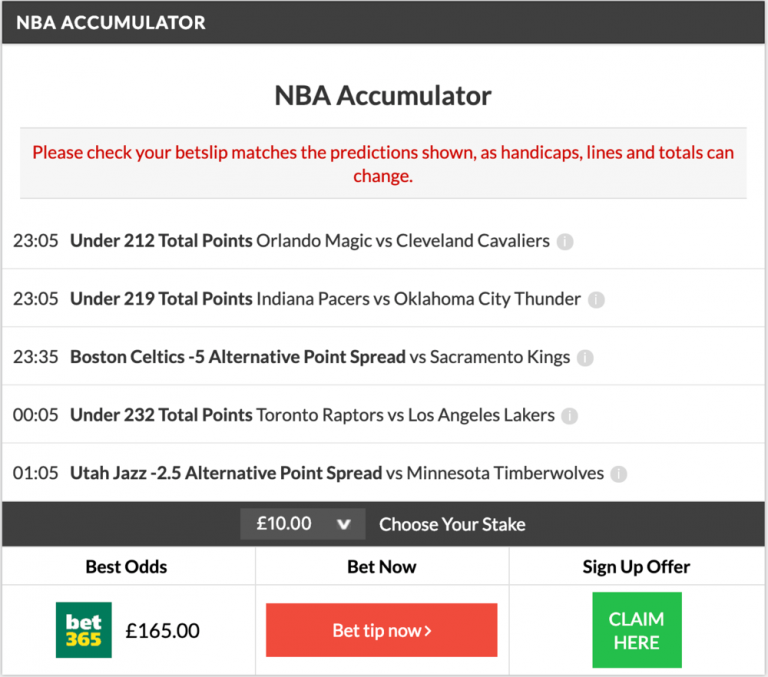 The winners keep on coming here at FST!

Our tipsters have worked their magic once again and this morning we woke up to two more winners!

Our NBA Accumulator landed at 15/1 with the Double also landing. Our tennis tipster also had success and his 9/1 Treble came in overnight!

Here’s how it all unfolded:

The night tipped off in Orlando where the Magic hosted the Cleveland Cavaliers and we went for Under 212 Total Points in this one. It was a close one as the Magic won 120-91 landing our bet by a single point, but we’ll take it!

Under 219 Total Points was our bet for Indiana vs Oklahoma City. The game went down to the wire and it finished 108-106 Indiana as Matthews hit the game winner for the Pacers, but more importantly we were 2/2 on the Acca!

The Celtics and Kings played a high scoring game in the 3rd game of the Acca. Just like with the first game, we had luck here as the Celtics won by 6 landing our -5 Point Spread by just a single point!

Our 4th tip on the Acca landed fairly easily as the Raptors beat the Lakers 111-98 for a total of 209 points. With our bet being Under 232 Total Points we had little worries with this one!

And finally the Utah Jazz blew out the Minnesota Timberwolves by 20 points at home. Six Jazz players scored in double figures for a complete team effort here which was more than enough for our -2.5 Point Spread and another NBA Acca had landed!

Our tennis treble started with Belinda Belcic and Karolina Pliskova squaring off… we went for 2-1 Bencic in this one and the bet started off tremendously as Bencic won the first set 6-3. Pliskova fought back and won the 2nd set 6-4. However, the 5th ranked player on the WTA standings didn’t have much to offer in the 3rd set as Bencic won 6-3 after 47 mins of play landing the first of three tips.

It was a fairly easy game for Miloš Raonić in the 2nd tip of our treble. In just 73 minutes he took care of business against Serbian Kecmanovic. In the end it finished 6-3 6-4 in favour of Raonić who moves on to the next round.

In the final match between V. Williams and Kerber we backed Over 21.5 Total Games expecting the match to go the distance. Luck was definitely on our side in this one… the first set went into a tie break which meant 13 games. With Kerber dominating the 2nd set it didn’t look good for our bet, but Williams was able to steal 3 games in the 2nd and with Kerber winning the match it meant a total of 22 games which landed our Treble!

Follow our FREE NBA TIPS page for even more winners! Tips usually go up on the website in the afternoon hours! As for tennis, we usually have tips for the bigger tournaments, so be sure to save our FREE TENNIS TIPS page and follow whenever there’s a big tournament being played!