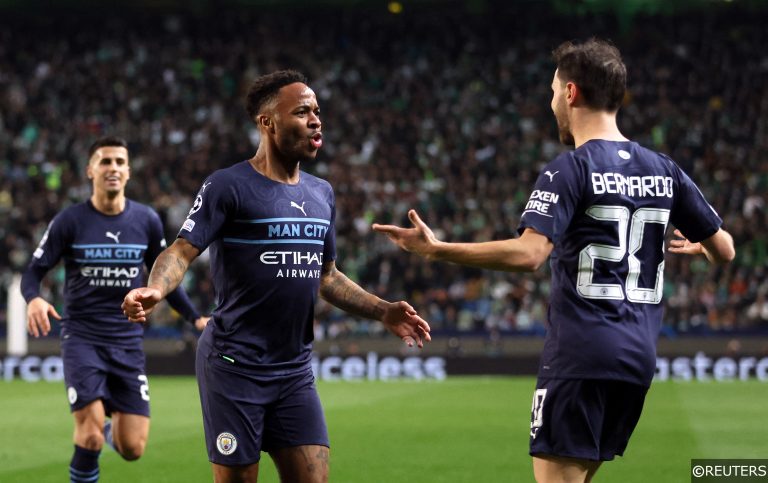 If last weekend’s clash in anything to go by, Saturday’s FA Cup semi-final between Man City and Liverpool is appointment viewing. The pair played out a brilliant 2-2 draw at the Etihad on Sunday, but they will be separated one way or another at Wembley.

We’ve already done our Man City vs Liverpool predictions, aiming to follow up the 8/13, 11/4 and 14/1 clean sweep of winners we landed during their Premier League clash five days ago. However, we’ve also put together a 160/1 bet builder tip, which you can back below.

City haven’t lost to Liverpool since 2019, while this isn’t a competition which has suited the Reds over the years. They last made the final of the FA Cup back in 2012, while they face a difficult task ending that wait this weekend.

The Reds have won just one of their last nine competitive meeting with Pep Guardiola’s side, so we’re backing City to find a way through this tie.

He didn’t find the net last weekend, but Mo Salah has a fantastic record against Man City over the years. The Egyptian hasn’t been at his best of late, but he got a bit of a break in midweek which should help him out in this clash.

Salah has scored four of Liverpool’s last seven goals against City, so expect him to be crucial in this weekend’s game.

Meanwhile, City will be looking to Raheem Sterling to make a big impact on this one, given that he’s scored in three of his last six starts against his former club. The winger has scored 14 times in all competitions this season, so he’s also a great bet to score in this clash.

Fabinho to be shown a card

Fabinho has proved to be a surprise scoring threat this season, but he remains Liverpool’s best spoiler in the middle of the park. Given that, it’s little surprise that the Brazilian is the Reds’ most carded player so far this term.

The midfielder was booked in the clash between these two last weekend, struggling to contain City’s attackers once again. Fabinho has now been booked in each of his last three appearances against Guardiola’s men, so we’re tipping him for a booking.

Virgil van Dijk to have 1+ shot

For their incredible frontline, Liverpool pack a punch from set pieces. They showed that against Benfica in midweek, while Virgil van Dijk has been a threat all season. He has registered 43 shots this season, taking at least one shot in seven of his last 11 appearances for the Reds. Back him to continue that fantastic run with an attempt in this clash.

Man City will also look to make the most of set pieces, with their style of play leading to them picking up plenty of corners. The Citizens have led the corners table in the Premier League ever since Pep Guardiola arrived, with their possession heavy, attacking approach often forcing the opposition into conceding corners.

This season has been no different, as City have averaged 8.42 corners per game in the league. Given that, back them to have at least six corners in this clash with the Reds.