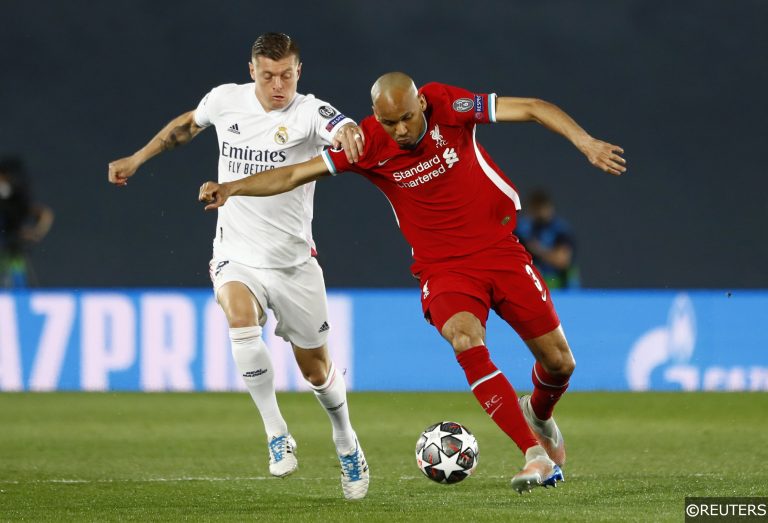 Anfield has hosted some of the Champions League’s most memorable evenings and stirring comebacks in recent seasons, however, Liverpool need a Merseyside miracle of epic proportions to overturn a first-leg deficit against Real Madrid on Wednesday.

Jurgen Klopp’s charges were thoroughly out-classed in Spain by Los Blancos last week, and in truth, Liverpool – who were beaten 3-1 on the night -were fortunate to avoid an even heavier defeat following a limp display littered with individual errors.

The Reds will need to attack from the first whistle in Wednesday’s return fixture to stand any chance of closing the aggregate gap, and that should produce another classic continental contest at Anfield.

That in turn makes the game a cracking fixture for bet builder and multi part aficionados, and below we’ve got tips for the match with that in mind, plus our own 21/1 bet builder acca.

Remember – you can read our detailed preview of the quarter-final in our Liverpool vs Real Madrid predictions.

Fortress Anfield has been crumbling this season, and ahead of Wednesday’s second-leg, Liverpool managed to win only two of their last ten fixtures on home soil.

With defensive injury issues persistent and no atmosphere to draw energy from, the Reds just haven’t got going at Anfield in 2020/21, and Real Madrid could be the latest team to avoid defeat on Merseyside.

Los Blancos cut through Liverpool at will in Spain, and they should have plenty of chances to expose their opponent’s defence on the counter attack this week.

Liverpool have kept just two clean sheets in their last 11 matches at Anfield, and having been led a merry dance by Real Madrid in the first-leg at the Estadio Alfredo Di Stefano, the Reds’ chances of keeping their Spanish opponents off the scoresheet on Wednesday feel slim.

Like their hosts, Real also have defensive injury issues to contend with however, and Liverpool’s rapid front three of Diogo Jota, Mohamed Salah and Sadio Mane should be able to produce enough moments between them against the visitor’s patched up defence to impact the scoreline.

Liverpool have a mountain to climb in Wednesday’s Champions League quarter-final second-leg and with a clean sheet seemingly beyond the Reds at present, the hosts will need goals and lots of them at Anfield.

The Merseysiders’ pursuit of those goals could leave them over exposed at the opposite end however, and that’s the perfect recipe for goalmouth action. Four goals hit the net in last week’s first-leg, and viewers could be treated to similar levels of excitement in Wednesday’s rematch.

Diogo Jota has scored six times in his last seven appearances for club and country, and the Portuguese flier’s performances have earned him what looks a permanent starting position in Liverpool’s frontline ahead of the less prolific Robert Firmino.

Remarkably, Jota has plundered 12 goals in just 14 Premier and Champions League starts for Liverpool this term, and the 24-year-old’s superb ratio marks him out as the host’s man to watch against Real Madrid.

Salah has been hitting the target with 1.2 of his strikes on average per game, though the 28-year-old is worth backing to double that figure in Liverpool’s must win game against Real.

The Reds are certain to go for the jugular from the first whistle at Anfield, so expect Salah to let fly at every opportunity.

Sky Super 6 predictions and tips – round 49