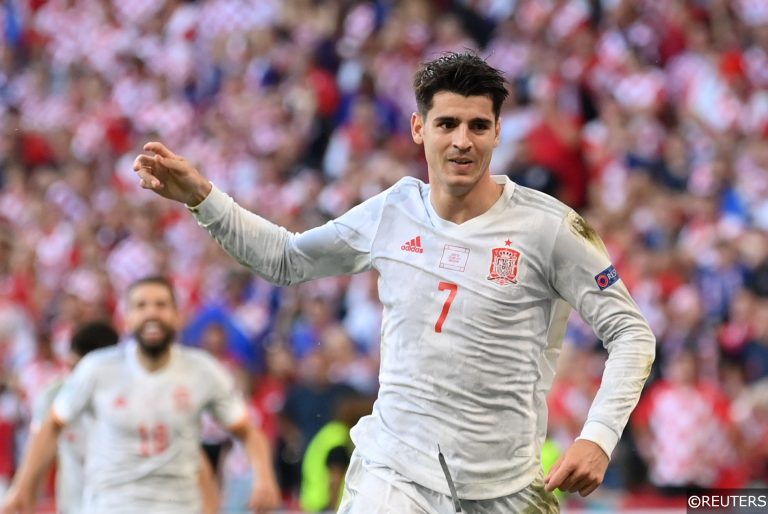 You may have noticed this week that England are into the quarter-finals of Euro 2020, with a serious chance of winning the whole thing. The Three Lions are heavy favourites to book a spot at Wembley, but just how will the quarter-finals play out?

Ahead of this weekend’s four games we’ve picked out a 27/1 Euro 2020 accumulator tip across each big game. For more daily accumulators, make sure to visit our free football tips page.

Spain started this tournament short on goals, but they’ve scored 10 goals across their last 210 minutes of action. That included their 5-3 win over Croatia, a match which was followed by Switzerland’s 3-3 draw with France. Given how those two matches went, we’re backing more goals in this clash.

Switzerland haven’t kept a clean sheet at this tournament but they’ve scored six times across their last two games. We’re backing both of these sides to find the back of the net in this clash, especially given that five of Spain’s last seven outings have seen BTTS land.

Italy are on a 31 game unbeaten run and the expectation is that they’ll continue that against Belgium on Friday night. The Red Devils are weakened with both Kevin De Bruyne and Eden Hazard both ruled out for the showdown. Can they pull off a shock against the Italians?

Italy have won 11 of their last 12 games and their possession-heavy style is perfect to dominate a Belgian side who have been more conservative of late. Roberto Mancini’s side have averaged more shots per game than anyone else and they’re likely to break through this ageing Belgian defence, while Italy’s vintage backline look as reliable as ever with the Red Devils short on creativity.

Next up in our Euro 2020 accumulator, we’re backing a Denmark side who have won their last two games by a combined score of 8-1. They have bounced back from their tough opening weekend to impress against Belgium before losing. The Danes have shown why they were pre-tournament dark horses with two great displays to make the quarters and they are capable of stopping the Czech Republic here.

The Czechs have only beaten Scotland and a 10-man Netherlands side at this tournament and given Denmark’s impressive scoring record of late we don’t see them being any match for the favourites.

England are heavy favourites for this one and they should see off a Ukraine side who have had an easy ride to the last eight. The Three Lions have won five of their last six games to nil, while they’ve won nine of their last 10 matches and Gareth Southgate has found the right balance which can take them to the last four.

Ukraine knocked out Sweden in the last 16 but they were lucky to get through after taking only three points from the group stage. However, England aren’t a high scoring side, as they’ve won five of their last six with each of those seeing under 2.5 goals. We’re wrapping up our Euro 2020 accumulator by backing another low-scoring England win on Saturday.