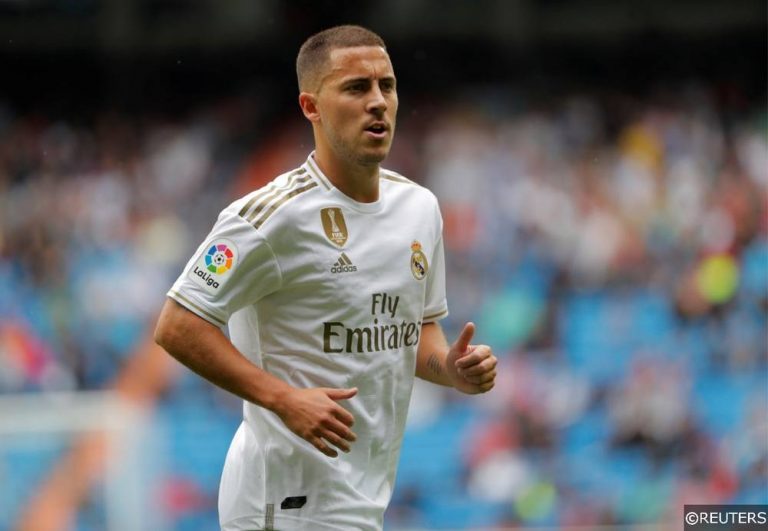 It’s the first Sunday since the return of La Liga and the last Sunday without the Premier League, and fortunately for us it’s set to be an absolute cracker!

Three of the top six in La Liga are in action as Atletico Madrid travel to Athletic Bilbao in the lunchtime kickoff before a brief Spanish hiatus before Real Madrid vs Eibar and Real Sociedad vs Osasuna.

Don’t worry about that hiatus, though. That void is filled with Bundesliga action as Mainz face off against Augsburg and Champions League hopefuls Bayer Leverkusen travel to the out of form Schalke.

To celebrate such a big day of European action we’ve rounded up the best looking Betfair OddsBoosts for the day ahead.

Betfair offer a wide range of enhanced prices on many of their featured matches to give your potential winnings a boost. If you don’t already have a Betfair account, you can sign up below and get up to £100 in free bets.

La Liga title hopefuls Real Madrid have won nine of their 14 home La Liga games this season and conceded just nine goals in the process. They might be playing at their training ground, but they should still have more than enough to beat an Eibar side that have lost four of their last five in the league.

Real Sociedad, who have won 10 of their last 12 competitive games, follow up with a hosting of Osasuna. They have already beaten their opponents twice this season and have won each of their last seven home games, while Osasuna have lost four of their last six matches. It should be a pleasant return to action for the Champions League hopefuls.

Galatasaray may be lagging behind in the Turkish Super Lig title race, but they are still a class above relegation candidates Rizespor. The hosts have lost six of their last seven league matches and face a Galatasaray side that have won eight of their last 10 in the Super Lig.

We’ve already discussed Sociedad’s excellent chances of victory above, but Cadiz’s home match against Rayo Vallecano is another interesting one in Spain this evening.

The Segunda Division leaders are some 13 points clear of Vallecano and they have only lost one of their last seven meetings with their opponents. Cadiz have won nine of their 16 outings at the Estadio Ramon de Carranza, and while Vallecano are tough to beat on the road the fact they have only won twice suggests they are there for the taking.

Runaway Ukraine Premier League leaders Shakhtar are heavy favourites against the relatively unknown Kolos Kovalivka on Sunday afternoon. The visitors have won seven of their last nine in the league and should take an easy win against a home side reeling from five straight defeats.

Romanian Liga I leaders Viitorul return to competitive action for the first time since March, and they should have enough about them to see off the visiting Politechnica Iasi. The visitors have lost nine of their last 11 in the league and eight of their last nine league meetings with Viitorul.

Karim Benzema has become the focal point of Real Madrid’s attack since Cristiano Ronaldo’s exit, and the result has been an uptick in his goalscoring form. He recorded his second best league season last year with 21 goals from 36 appearances, and he could be on track to break that barrier this year.

He currently sits on 14 strikes in 26 matches, so it’s clear he tests the keeper with regularity. In fact, Benzema averages 3.7 shots per game in La Liga and that rises to 4.3 per game on home soil. Eibar face an average of 9.7 shots per game, so it’s well within the realms of possibility that Benzema will pepper Eibar’s goal a few times.

Top four challengers Bayer Leverkusen are expected to take Schalke to the cleaners this evening. The hosts have lost six of their last eight Bundesliga matches and five of their last seven losses have been by at least a two goal margin. Kai Havertz and company, meanwhile, have notched 12 times in their last five Bundesliga away days.

Leverkusen are also find themselves standing guard next to the corner flags more often than most teams, averaging 6.13 corners per game and behind only Bayern Munich and Eintracht Frankfurt. Schalke, meanwhile, conceded an average of 5.3 corners per game.

Schalke aren’t the least disciplined side in the Bundesliga, but they do average 1.76 cards per game and their last home match saw them booked five times against Werder Bremen.

Where to watch all the Premier League action