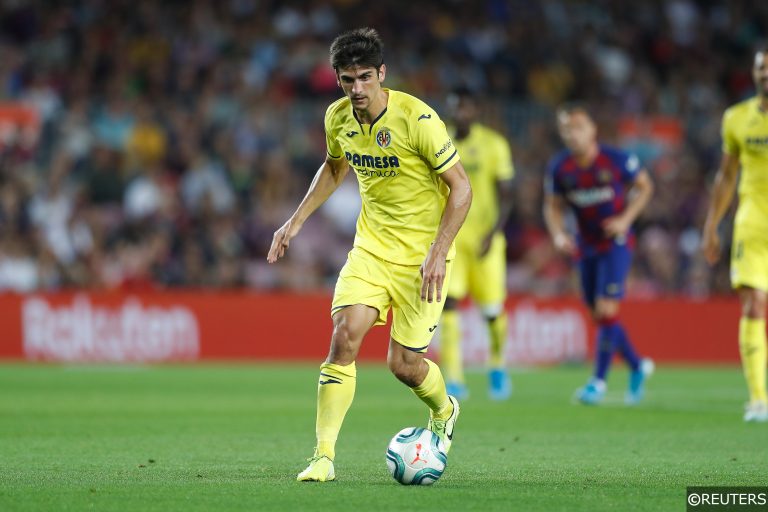 Spanish fútbol makes its long-awaited comeback with the resumption of the 2019/20 La Liga campaign later this week!

There is a full programme of Spanish elite level football for us to sink our teeth into between Thursday and Sunday, with the El Gran Derbi between Sevilla and Real Betis kicking us off in style in the week’s first offering.

With everything still to play for at both ends of the table, the domestic season in Spain is gearing up to deliver a thrilling climax, and to get you in the mood for La Liga’s return, we’ve listed some of the  goalscorers to watch for in the division’s first round of fixtures after its three-month layoff.

Remember – we’ll be covering all of the Spanish top-flight football extensively on our La Liga predictions page.

Versatile forward Lucas Ocampos has enjoyed a prolific season for Sevilla, and the Argentine is on track to record the most prolific season of his career so far in 2019/20.

The 25-year-old, who is best deployed in a wide right or left position, has already bagged 10 Liga goals this term, one of which was plundered in the last El Gran Derbi meeting between Sevilla and Real Betis earlier this season.

In the run up to the COVID-19 postponement, Ocampos had scored in three La Liga fixtures on the spin, and the former Milan and Marseille star will be desperate to pick up where he left off.

Veteran French hitman Kevin Gameiro will have Valencia’s local rivals Levante in his sights when the traditional antagonists face off in the Derby del Turia on Friday evening.

The 33-year-old smashed home two goals in two minutes for Valencia when they claimed all of the points as well as the bragging rights ahead of their neighbours following a 4-2 win at the Estadi Ciutat de València in December.

Right before football was stopped across Europe in March, Gameiro had hit a rich vein of form, notching three goals in as many games for Los Che, including a brace in the club’s Champions League defeat to Atalanta.

28-year-old Villarreal striker Gerard Moreno has been quietly establishing himself as one of La Liga’s best goalscorers outside of the division’s big three over the past half a decade.

Moreno hit 13, 16 and eight league goals in his last three top-flight campaigns for Espanyol and Villarreal respectively, and with a tally of 11 goals in 25 La Liga appearances already reached for the current campaign, the centre-forward is on course for his best ever season.

The late bloomer was rewarded with a call-up to the Spanish national team last year, and Moreno showed his class by hitting three goals in three run outs for La Roja.

Brazilian prodigy Rodrygo has only seen bits and pieces of first team action for Real Madrid this season, though the talented teenager rarely fails to disappoint when handed an opportunity.

The 19-year-old has already scored an impressive seven times in just 11 starts in all competitions for Los Blancos since August – an attacking output that should prove difficult for Zinedine Zidane to ignore.

Real re-start their 2019/20 campaign with a winnable looking home match against struggling Eibar in the capital on Sunday, and Zizou could see the fixture as an ideal platform for Rodrygo to showcase his talents again.

The Swedish striker hit seven goals in just nine La Liga starts this season, and Isak bumped up his numbers for the 2019/20 campaign by smashing home a superb eight goals in just three Copa del Rey appearances during the same period.

Isak registered two of those cup goals against Osasuna in a 3-1 Last 16 win for Real Sociedad in late January, adding to the La Liga goal he struck against them a month earlier on December 22.

The former Borussia Dortmund youngster, who was tearing Eredivisie defences to shreds while on loan with Willem II last year, will be aiming to make a similar impact against Osasuna on Sunday.