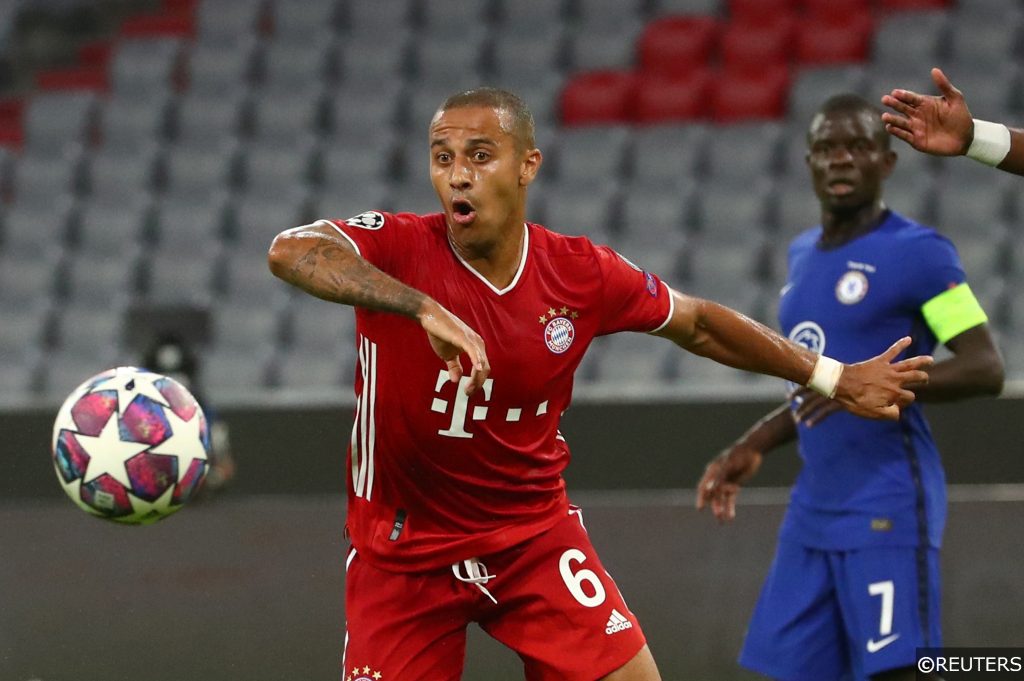 Ex-Liverpool and Republic of Ireland midfielder Jason McAteer has tipped Thiago Alcantara to make a positive impact with the Premier League champions once the schemer completes his move to Anfield.

The technically gifted playmaker is currently on Merseyside ahead of finalising his switch to the Reds from German giants Bayern Munich in a deal that is expected to cost Liverpool in the region of £20m, with a further £5m in add-ons.

Thiago, who came through Barcelona’s famed La Masia academy system before moving to Germany in 2013, won the treble with Bayern last season, and played a key role in helping the Bavarians to their 6th Champions League trophy in August’s Final against PSG.

Thiago expressed his desire to seek out a new challenge shortly after Bayern Munich’s victory in Lisbon however, and Liverpool, the player’s preferred destination this summer, look like finally landing their primary target after a prolonged pursuit.

At 29, Thiago is a departure from Liverpool’s usual transfer policy of signing younger players on the up, though Jason McAteer thinks the Spanish international still has plenty to offer.

Speaking in an exclusive interview with Spotlight Sports Group, McAteer said: “He would be a welcome addition, and I don’t think you can knock his quality.

“But because of his age and the way Liverpool do their business in the transfer market, he doesn’t really fit the criteria of the business model we’ve seen Liverpool use in the past.

“For a player of that quality, he is relatively cheap although he does only have a year left at Bayern, he certainly adds something a little bit different to what Jurgen has now.

“We do have nine or 10 midfielders at the minute and that area of the squad is very strong, albeit with a lot of similar players. He does add composure great range of passing: he likes to get on the ball, play central and find passes. His weight of pass and decision making is very good.”

Meanwhile, fears had started to surface among Liverpool supporters that Thiago’s arrival could signal the end of popular Dutchman Gini Wijnaldum’s stay at Anfield, and with Barcelona lurking, the versatile 29-year-old could be tempted to link up with his compatriot and new Barca boss Ronald Koeman at the Camp Nou.

However, while McAteer accepts Wijnaldum could see a move to Barcelona as a chance to land one last bumper contract, the former Liverpool winger thinks the Netherlands star still has a role to play alongside Thiago.

“I would love [Gini Wijnaldum] to stay. He’s one of those players Jurgen looks at as one of the first names on the team sheet.

“He’s very industrious – maybe he doesn’t get as many goals as you’d probably like – but he does that job in the midfield, which is the engine room. They win a lot of tackles and interceptions and they give it to the players that go and do the damage, which is usually the front three.

“Thiago is probably more creative than any of the other players we’ve got, and there will be a place for him in certain games because, as we know, teams like to drop. Teams will set out to ask questions of Liverpool to break them down and try to create something, so Thiago would probably play in those kinds of games.

“Gini’s not getting any younger and is out of contract next season. From the player’s perspective, Koeman’s gone in at Barcelona and he’ll know Gini extremely well from the Dutch set-up.

“He’s also won everything with Liverpool and his age now comes into effect. His agent is probably saying ‘You’ve got one more deal, one more big move in your career. It’s Barcelona’. They’re probably going to up his money.

“He’ll be torn at the minute. He doesn’t want to leave Liverpool but their offer on the table probably doesn’t quite meet Gini’s expectations.”

The Reds travel to take on Frank Lampard’s new-look Chelsea on Sunday in a heavyweight Premier League clash. Read our Chelsea vs Liverpool predictions ahead of the action here.

League One predictions and best bets for Tuesday (with 24/1 acca!)
Football