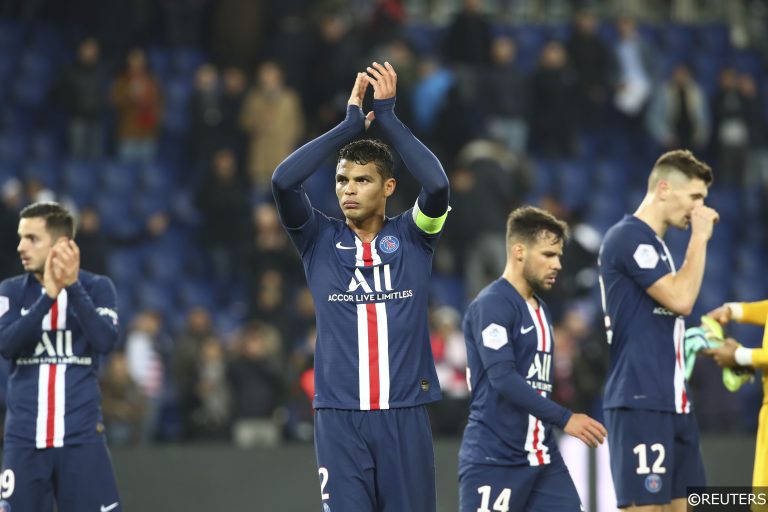 Paris St. Germain captain Thiago Silva looks set to leave the French champions later this summer after eight silver-lined seasons with the club – and according to reports, five Premier League clubs are among the early contenders to sign the Brazilian.

The 35-year-old centre-half will not be offered an extension to his current contract beyond the end of PSG’s Champions League campaign, and it is believed that Silva has already been informed of the same by sporting director Leonardo.

That decision means that the vastly experienced defender will be available to switch clubs for free before the start of next season.

PSG are actively trying to reduce their sky-high wage bill as a matter of urgency, with the club facing estimated losses north of €200 million after the 2019/20 Ligue 1 season was cancelled in April due to the escalating coronavirus pandemic.

Silva joined PSG from Serie A giants in 2012 for €42m in 2012 and quickly established himself as one of the world’s best performers in his position, winning seven Ligue 1 titles, four Coupe de France and five Cope de la Ligue trophies during a glittering spell in the French capital.

While stories linking Silva with a return to his homeland with former club Fluminense have been abound, other reports have suggested that the Brazil regular could be tempted to spend the twilight years of his career in England.

The centre-back is certain to have a lengthy list of potential suitors right across the globe to choose from – with clubs from the MLS, China as well as ex-employers AC Milan already thought to be putting together packages to sign him.

However, the financial and competitive combination the Premier League could offer might prove hard to resist.

Arsenal, Everton, Wolves, Newcastle and West Ham are the English top-flight clubs credited with an interest in bringing Thiago Silva to the Premier League – and each club will believe they can convince the PSG star to choose them over their competitors for his signature.

With David Luiz and Gabriel Martinelli already in house, the Gunners have a couple of compatriots to help Silva settle in, while Thiago’s international teammates at Everton, Richarlison and Bernard, could be used to sell him on the idea of a move to Goodison Park.

The strong Portuguese contingent at Wolves would ensure that the language barrier is not a problem for Silva at Molineux, while Selecao squad member Felipe Anderson is currently attached to West Ham.

Newcastle’s chances of tempting Silva to the north east will hinge on the outcome of the club’s big-money takeover bid, though the veteran defender might find the Magpies’ “project” too similar to the one he is leaving behind in Paris.