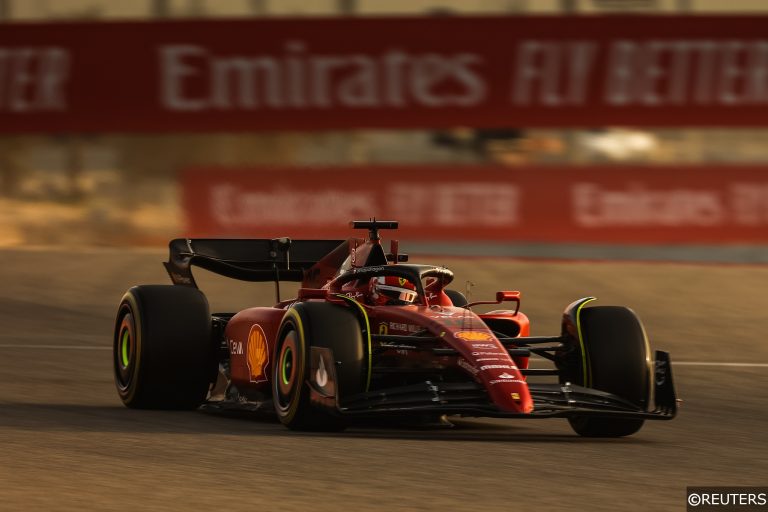 The Formula 1 2022 season gets underway with qualifying on Saturday and the Bahrain Grand Prix on Sunday and, following on from our season preview and outright predictions, we’ve got tips for the entire weekend right here.

With two Free Practice sessions done and dusted, there are a few surprises in the final standings and I’ve covered them, and more, below.

Max Verstappen to be fastest qualifier @ 11/10

Red Bull Racing’s 2022 car has looked to have the sheer pace advantage throughout both testing and practice so far and the reigning World Drivers Champion, Max Verstappen, can use that to his advantage on Saturday afternoon.

He topped the leaderboard in Free Practice 2 and, while the car did look difficult to handle at times in testing, when it all comes together this Red Bull looks to be the quickest car on the grid.

Verstappen took pole in Bahrain last year and lined up at the front of the grid eight times last season, so expect him to be up there.

The Bahrain Grand Prix has only been won from pole three times in the last eight iterations and two of those were Lewis Hamilton, who looks like he could be in for a slow start to the season after a troublesome test and Free Practice.

The Mercedes could only manage fourth (Russell) and ninth (Hamilton) in FP2 and the porpoising down the straight looks a real problem that won’t be overly simple to fix.

That makes Red Bull and Ferrari the frontrunners and there’s every reason to believe the boys in red could be celebrating come Sunday evening.

There was a lot of positive noise around Ferrari after pre-season testing and, if the first couple of practice sessions are anything to go by, they might actually have a competitive car this year.

Charles Leclerc and Carlos Sainz were second and third respectively in both Free Practice sessions on Friday and they undeniably have one of the best driver pairings on the grid, perhaps lagging behind only Hamilton and Russell.

Ferrari have the joint-most wins (6) at Bahrain along with Mercedes and Red Bull haven’t won the Bahrain Grand Prix since the dawn of the turbo-hybrid era, with Mercedes and Ferrari taking six and two wins respectively since then.

Carlos Sainz to finish on the podium @ 5/6

Charles Leclerc may be the poster-boy for Ferrari but Carlos Sainz is a consistent and pacey operator and it wouldn’t be a surprise to see both Ferrari drivers on the podium on Sunday.

He’s longer odds than his teammate and has the consistency and cool head to get his season off to a flier.