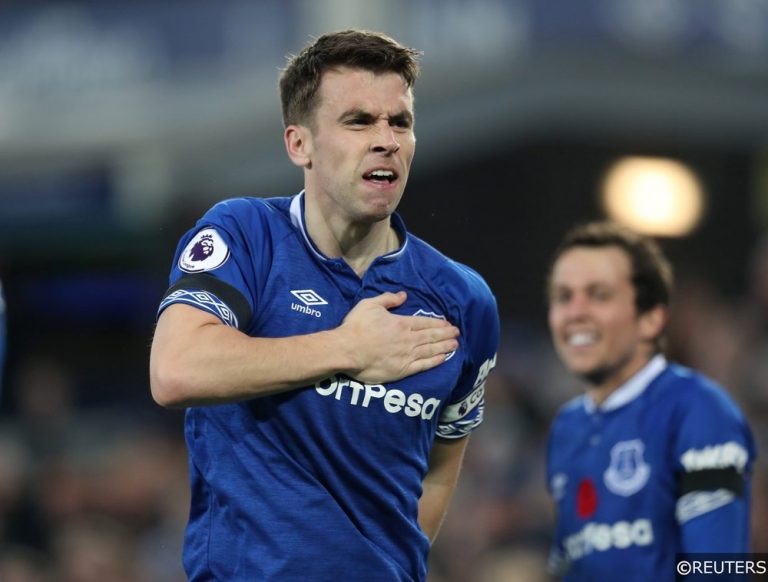 Hostile local rivalries will be renewed and old grudges revisited this weekend when Everton meet Liverpool in the 236th Merseyside Derby at Goodison Park on Sunday.

With one hand already on their first ever Premier League trophy and their first English title in 30 years within reach, Jurgen Klopp’s relentless Reds are just two wins from glory, though the Toffees would love nothing more than to prolong their city rival’s wait for domestic silverware.

For Everton, the incentives for victory don’t stop there however, and with a top half finish in 2019/20 the aim, the Blues should provide a stiff test for a Liverpool team searching for a potentially era-defining moment.

To get you in the mood for what should be an enthralling encounter on Sunday afternoon, our analysts have put together a five-part selection using Betfair’s OddsonThat feature.

Make sure to check out our Everton vs Liverpool predictions to read our expert’s betting tips and detailed analysis for the game.

Want to add FST’s 55/1 selection straight to your betslip? Check it out below:

Champions elect Liverpool have held total dominion over Merseyside over the past decade, and you have to go all the way back to 2010 to find Everton’s last win in this traditional local skirmish.

With 12 wins from 14 away assignments since August, the league leading Reds’ consistency on the road this season has been exceptional, and having beaten Everton twice already this season in league and cup they look well placed to complete a hattrick of victories on Sunday.

In addition, with the Premier League trophy in sight, Liverpool will be doubly determined to get over the line as quickly as possible, and Jurgen Klopp’s charges will be going all out to avoid any slip-ups.

While we expect Liverpool to do the business on Sunday, we think there is every chance the Reds will concede en-route to victory.

Everton scored at least once in 11 of their 14 Premier League home assignments this season, and with Dominic Calvert-Lewin and Richarlison in particular flourishing under Carlo Ancelotti’s instruction, we think the Toffees can register against a Liverpool defence that was showing signs of weakness before football’s postponement in March.

The Reds failed to keep a clean sheet in any of the six matches they contested directly before the enforced break, and they should have trouble keeping their hosts off the scoresheet at Goodison Park.

With three career goals for Liverpool against Everton to his name already, Sadio Mane has a proven ability to thrive in the pressure cooker intensity of the Merseyside Derby.

The Senegalese international remains one of the Reds’ most potent attacking weapons and Mane will hope to drag his 14 goal Premier League haul closer to the 20 mark before the season finishes later this summer.

Mane scored one of Liverpool’s goals in their 5-2 rout of Everton before the turn of the year at Anfield, and the 28-year-old is sharp enough to make a similar impact again on Sunday.

Dominic Calvert-Lewin to be booked

Everton striker Dominic Calvert-Lewin’s performances have come on in leaps and bounds since he was handed a role of greater responsibility by Carlo Ancelotti last year.

With 13 Premier League goals, the 23-year-old has been developing a deadly touch in the final third, but another less noble statistic has also caught our eye.

The centre-forward with a keen competitive streak has picked up seven Premier League bookings for his often-overenthusiastic challenges for the Toffees this season – making him the worst offender in the Everton squad in terms of cards accumulated.

In what promises to be a cut and thrust derby battle on Sunday, we think the hard-hitting frontman is a prime candidate to land himself in trouble again.

The last four Merseyside Derbies saw an average of 11.75 corners awarded to both teams combined – a trend we expect to continue when Everton Liverpool collide again on Sunday.

Only five Premier League clubs have seen more corners awarded per game on average this season than Liverpool. An average of 11.25 corners were awarded to both teams per 90 minutes on average, while only Man City (8.17) and Chelsea (6.83) have won both corners than Liverpool (6.59) per game individually.

Everton, meanwhile rank just two places below Liverpool in the same metric in 5th, having won 6.03 corners on average per Premier League run-out since August.

Premier League odds, team news and where to watch all this weekend’s games