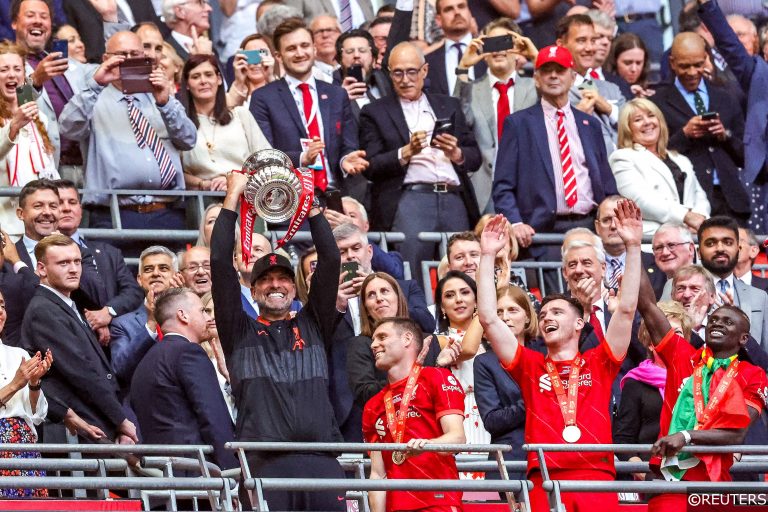 Excitement is building ahead of the return of elite football this weekend but the top-flight enthusiasts among us still have another week to wait until many European leagues embark on their 2022/23 adventure.

Don’t despair, though! That means we have an extra week to assess the outright markets and I’ve been using that time to good effect, combining all our top league picks into one huge 1,991/1 acca!

Want the EFL equivalent? Check out our 974/1 EFL winners treble and our mammoth 43,114/1 top goalscorer accumulator!

You can also find every single one of our outright tips on FST’s 2022/23 season outrights hub.

The last four seasons have seen Manchester City and Liverpool relentlessly pursue perfection and just one point separates the two clubs over this 152-match period.

With this in mind, it is hard to get behind Manchester City at odds-on, especially when they will need to make some drastic changes to their playing style to accommodate Erling Haaland. The Norwegian’s arrival will undoubtedly prove fruitful in the long term, but there is every chance of a slow start and that could be fatal when every point counts.

Liverpool lost the title by just one point last term despite losing Mohamed Salah and Sadio Mane for a month to their national sides. This season, Salah and Luis Diaz will enjoy a month of rest during the World Cup and that could make all the difference.

Borussia Dortmund to win (without Bayern Munich) at 11/8

As always, Bayern Munich are overwhelming favourites and worth swerving in the outright market, but Borussia Dortmund should make another claim to the best of the rest crown.

They have won this market in three of the last four seasons and, while they have lost Erling Haaland, they have brought in some key players with Sebastian Haller, Niklas Sule and the highly-rated Karim Adeyemi all joining the cause.

Edin Terzig knows the club well after 12 years in various roles around Borussia Dortmund and main challengers RB Leipzig have lost a host of talent this summer.

PSG may be huge favourites in Ligue 1 but when you take the big-spending champions out of the equation things are a lot more competitive.

Marseille were best of the rest last season but will have a Champions League campaign to focus on, while Monaco will also be distracted by European commitments.

Lyon may have finished a disappointing eighth last term but they were only ten points off Marseille and can focus fully on the league. They have kept the bulk of their squad in tact while adding Alexandre Lacazette and Corentin Tolisso to their ranks, while Nicolas Tagliafico and Johann Lepenant are other eye-catching acquisitions.

Defending champions Ajax have lost a host of important personnel, with manager Erik ten Hag departing and the likes of Lisandro Martinez, Nicolas Tagliafico, Sebastian Haller and Ryan Gravenberch all heading for the exit door, too.

It will be a season of transition for the Amsterdam club and PSV can take advantage of their largely settled squad. They have lost a few players but Luuk de Jong’s arrival and Ajax’s transition can held them bridge the two-point gap from last season.

Sporting Lisbon to win at 9/4

Porto beat Sporting Lisbon to the title by six points last season but have seen their squad decimated in the last six months. They lost Luis Diaz in January and have seen Vitinha and Fabio Vieira, who contributed eight goals and 17 assists between them, depart this summer.

Sporting’s only major loss from last season’s squad is the departure of Pablo Sarabia, but they have brought in plenty of defensive reinforcements and added Barcelona winger Francisco Trincao on loan. Overall, they look to have retained more of their most influential players than Porto so could pip their rivals to the post this season.

Both teams dropped just seven points since January last term so I’m siding with the higher price of Sporting, while Benfica could be a long way back after losing Darwin Nunez.

It is hard to look beyond Los Blancos after their claimed their 35th La Liga title last season, beating arch-rivals Barcelona by 13 points.

Xavi’s arrival in November sparked a resurgence for Barcelona but they still picked up five fewer points than Real Madrid since he took the reins and that was while Real Madrid maintained their successful Champions League campaign.

The Catalan club have strengthened their squad with the likes of Raphinha and Robert Lewandowski but internal politics and cashflow issues make them hard to back, while Real Madrid haven’t sat on their laurels, either, with the arrival of Aurelien Tchouameni and Antonio Rudiger.

Simone Inzaghi proved he was ready for the step up in his first year in charge, winning the Italian Cup alongside their strong title defence. Now Lukaku is back, plus they’ve added Andre Onana from Ajax, which should take the Nerazzurri beyond AC Milan and keep them clear of Juventus.