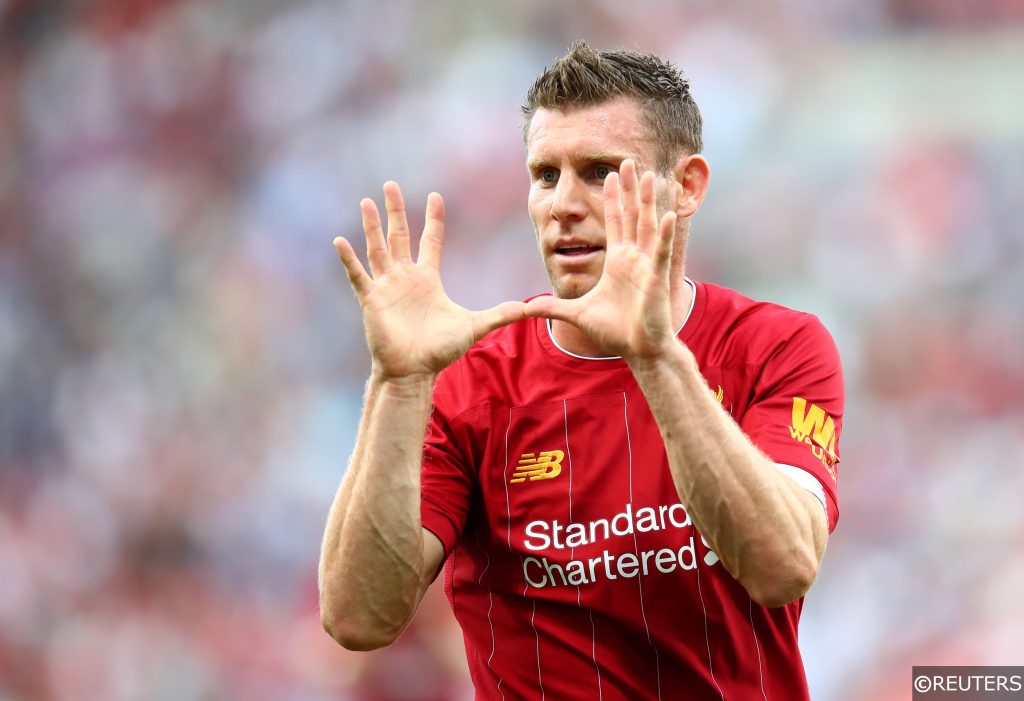 The Premier League’s reputation for unpredictability and against the odds drama was further solidified at the weekend after another round of chaotic top-flight fixtures.

In the pick of Saturday’s action, Brighton upset the odds to topple high-flying Aston Villa, while Tottenham Hotspur smashed and grabbed their way to three points against Man City.

A day later, Everton rediscovered their winning touch at Fulham, Arsenal stole a fortuitous point at Leeds, before an understrength Liverpool taught title pretenders Leicester a harsh lesson at Anfield.

On Monday, Burnley finally secured their first victory of the new campaign at Crystal Palace’s expense, before Wolves and Southampton closed out round nine with a keenly contested 1-1 draw at Molineux.

Below we’ve taken a look at the players that put in the best individual performances during game week nine of the 2020/21 Premier League season in our latest Team of the Week selection. 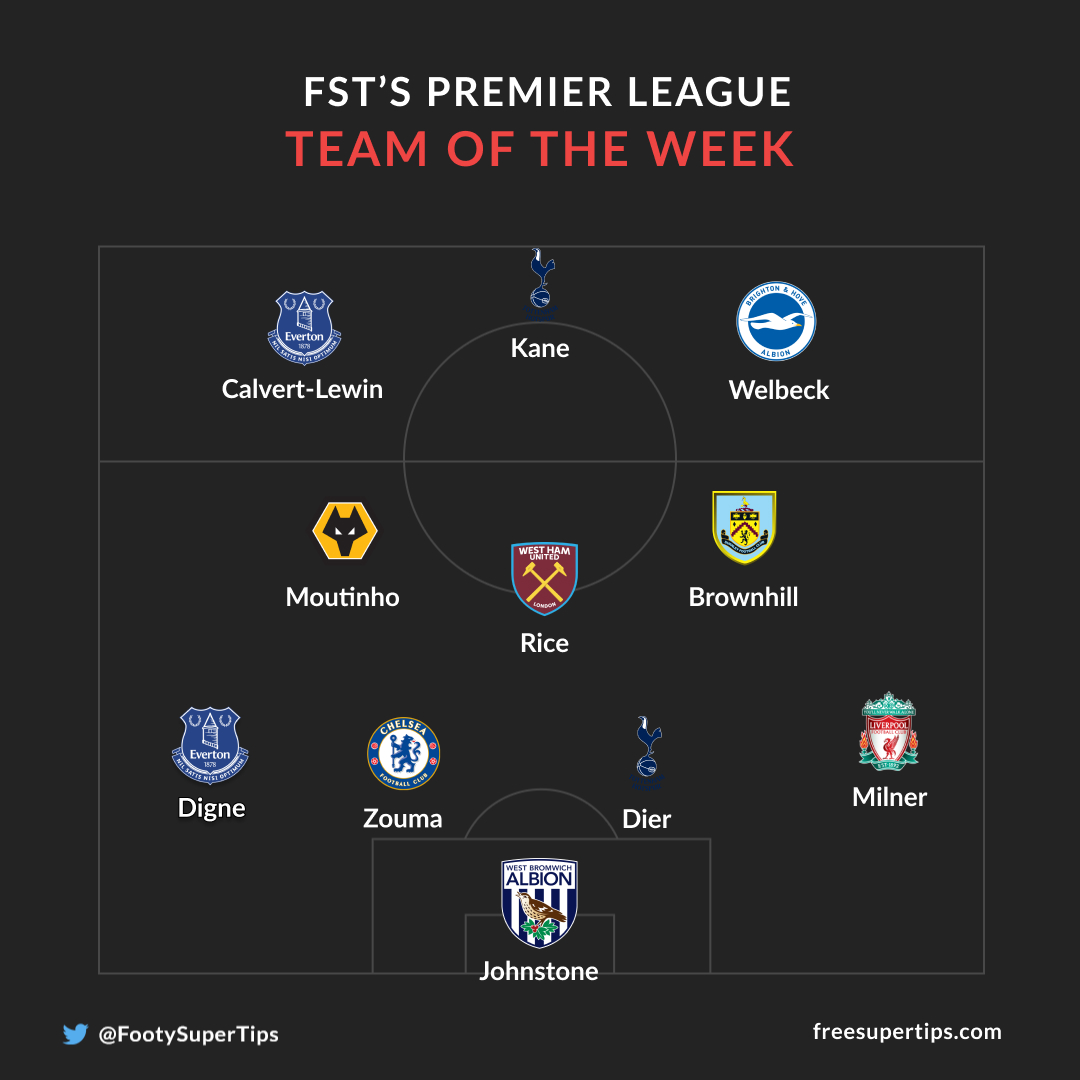 Ex-Man Utd academy starlet Sam Johnstone returned to his old stomping ground on Saturday evening, and but for the goalkeeper’s heroics, West Brom might have lost by a much wider margin at Old Trafford. Johnstone made six saves in total against the frustrated hosts, and his point-blank stops from Anthony Martial and Marcus Rashford were particularly eye-catching.

The Scousers’ Swiss army-knife James Milner filled in at right back for a depleted Liverpool team in the Reds’ comfortable 3-0 triumph over Leicester City on Sunday, and the versatile veteran was superb. Milner performed all of his defensive tasks with typical professionalism, and the 34-year-old even had time to channel his inner Alexander-Arnold late in the second half when he assisted Roberto Firmino for the third goal.

In a largely backs to the wall win over Man City on Saturday, Spurs needed their defenders to bring their A game to North London, and Eric Dier was the standout performer in the team’s robust rearguard. The England international completed a game-high eight clearances in total against the Citizens to repel the visitor’s numerous attacks.

French centre-half Kurt Zouma topped the charts for defensive aerials won (nine) and clearances completed (six) for Chelsea in the Blues’ 2-0 win over Newcastle United at St. James’ Park on Saturday. The 26-year-old also hit the mark with an unbeatable 96% of his attempted passes during his well-rounded display.

Lucas Digne continues to be one of the Premier League’s most prolific chance suppliers, and the Frenchman bagged two assists for Everton in the Toffees’ white-knuckle 3-2 win at Fulham on Sunday. The 27-year-old delivered two first half peaches from the left flank, allowing both Dominic Calvert-Lewin and Abdoulaye Doucoure to register against the Cottagers.

Declan Rice generally stands out a mile whenever West Ham play, and the England international was a class apart again on Sunday in the Irons’ hard-fought 1-0 win at Sheffield United. The 21-year-old covered every blade of grass at Bramall Lane, and Rice was unlucky not to cap his performance with a goal after a second half header cannoned off the woodwork.

Starting his first Premier League match in over a month, Joao Moutinho rolled back the years for Wolves in Wanderers’ draw with Southampton on Monday, and the Portuguese maestro was the game’s chief string puller at Molineux. With three key passes and an 87% pass completion percentage, the 34-year-old was an untouchable engine room operator, and Moutinho showed a different side to his game when he completed more successful tackles (three) than any other player on the pitch.

The Clarets finally recorded their first Premier League victory of the new season against Crystal Palace on Monday evening, and midfielder Josh Brownhill was central to their success. The 24-year-old made more successful tackles (three) than any other player involved at Turf Moor, and with an 86% pass completion rate, Brownhill’s distribution was also more accurate than any of his Burnley teammates.

Danny Welbeck reminded everyone of his existence and of his talent with a hugely impactful performance for Brighton at Villa Park on Saturday. The ex-Man Utd and England man notched the Seagulls’ opener with a wonderfully taken first half effort, and Welbeck’s clever movement and line-breaking pace caused numerous headaches for the Villains throughout.

Dominic Goalvert-Lewin just keeps producing the goods for Everton, and the red-hot striker helped himself to two more goals against Fulham on Sunday, bringing his total for the season so far up to 10 from just nine Premier League appearances. The 23-year-old is beginning to look like the real deal, and his final third potency could carry the Toffees far this term.

Playing up front isn’t always about just scoring goals, and Harry Kane’s relentless running, hold up play and willingness to work his socks of for Tottenham helped Spurs to a crucial 2-0 victory against Man City on Saturday. Amidst his warrior-like work-rate, Kane’s quality allowed him to set up the contest’s crucial second goal for Giovani Lo Celso in the second half.