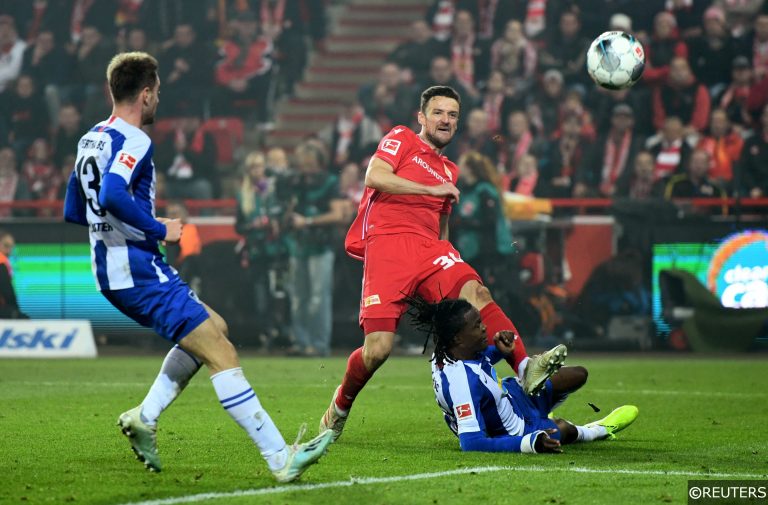 There’s a triple header of Bundesliga action today, kicking off at 12:30 when the struggling Werder Bremen host Wolfsburg. That match is swiftly followed by Union Berlin vs Schalke before Augsburg’s clash with Cologne takes you through to the evening.

It’s not just the German top flight to keep an eye on, either. The Bundesliga 2 has three scheduled fixtures, while the Danish Superliga returns with seven matches on Sunday and there’s action from Portugal, Austria, Poland, Greece, Belarus and the Czech Republic too!

We’ve already looked at all the latest Bundesliga odds and team news for Sunday’s matches, but now it’s time to delve into the wonderful world of Betfair OddsBoosts.

Betfair offer a wide range of enhanced prices on many of their featured matches to give your potential winnings a boost. If you don’t already have a Betfair account, you can sign up below and get up to £100 in free bets.

The Danish Superliga returned to action with a bang last week and now they’ve had some time to get up to speed we’re expecting the goals to flow on Sunday.

We’ve predicted at least two goals in all seven games this weekend and you can read into each Danish Superliga fixture here, but it’s easy to see why. All 14 of these teams have seen at least two goals scored in at least 75% of their respective home and away matches, and 11 of the teams top 80% in this metric.

A triple header of Bundesliga 2 action starts off our day and our Bundesliga 2 predictions suggest the goals will be flying in right from the off.

Hannover’s home match against Heidenheim isn’t likely to produce any clean sheets, with both teams finding the net in 71% of Hannover’s home games this season thanks to their lack of defensive ability.

Erzgebirge Aue’s clash with Karlsruher is equally likely to see goals at both ends, with both teams have scoring in 64% of their respective home and away matches.

Finally we head to the Mercedes-Benz Arena to watch the free-scoring Stuttgart continue their title challenge. Their last eight home games have averaged 3.25 goals per game and, while they are fairly good defensively, they face an Osnabruck side that have scored in a massive 16 of their last 18 league matches. 5/1 looks a very tasty price.

First up in a triple threat of Bundesliga action sees the struggling Werder Bremen face Wolfsburg, and it’s looking unlikely to be a pleasant afternoon for the hosts.

Die Werderaner have been atrocious this season and hold the joint worst defensive record in the top flight. It’s been especially bad for them at the Weser-Stadion, where they have lost eight of their last nine games and conceded at least two in seven of these. Wolfsburg, meanwhile, have won four of their last five on the road and netted twice or more in all of them, averaging three goals per game.

As far as corners are concerned, Wolfsburg average a very healthy 5.07 corners per game and they’re facing one of the worst teams in the league when it comes to keeping their opponents away from the corner flag, conceding 5.61 corners per game on average.

A nice, simple one. We’re not expecting many goals when Union Berlin host Schalke, but for this bet we just need one. Schalke have been utterly woeful since the resumption of the Bundesliga and are currently riding a four match losing streak.

Union Berlin aren’t in the best of form, but leading scorer Sebastian Andersson found the net last time out and, with a massive eight of his 12 Bundesliga goals this season opening the scoring, odds of 5/1 for him to hit the back of the net first are very attractive.

Augsburg vs Cologne is expected to be a closely fought encounter on Sunday evening, but goals are most certainly predicted. Both teams have scored on each of Cologne’s last six outings and they visit an Augsburg side that have seen goals at both ends in five of their last six at home.

As far as the corners and cards go, Cologne average a respectable 5.38 corners per game in the Bundesliga but concede at a rate of 5.59 per game. Augsburg’s average corners won figure sits just below 4 per game, but they concede 5 at the other end so a high corner count wouldn’t be a surprise.

Nor would a busy afternoon for the referee, with Cologne holding the joint worst disciplinary record in the Bundesliga (67 yellows, 4 reds) and averaging 2.44 cards per game. Augsburg’s average sits at 1.96 cards per game, so a couple of cards for each team looks on the cards (pun intended).

What football is on this week?