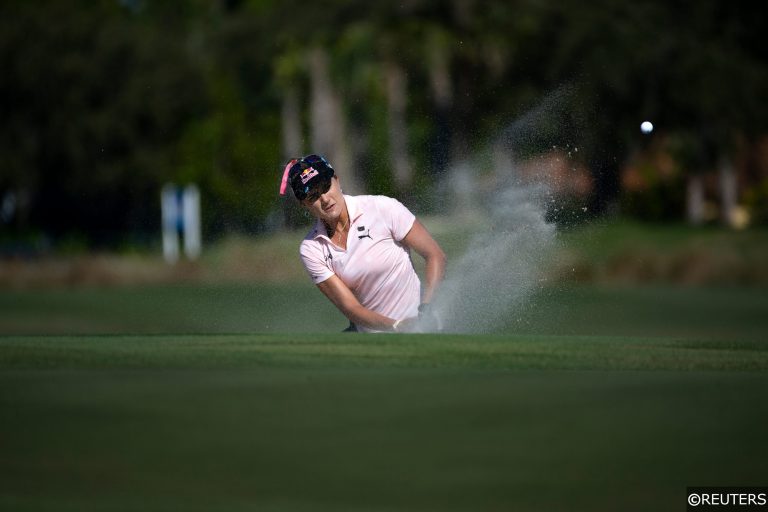 The first major of 2021 – The ANA Inspiration – has arrived, where a star-studded field will compete in California for the right to make the leap into Poppie’s Pond.

South Korean Mirim Lee won the tournament last year when she shot 15-under-par 273 and defeated Brooke Henderson and Nelly Korda on the first play-off hole – and all three players return to the Dinah Shore Course to compete for glory again this year.

Some of the field’s other competitors caught our eye this year however, and below you can read our predictions and betting tips for the 2021 ANA Inspiration.

Last week, we successfully tipped Daniel van Tonder to upset the odds at the Kenya Open at huge 45/1 odds! Check out our betting tips and predictions for the ANA Inspiration below.

ANA Inspiration course guide and where to watch

Where to watch: Sky Sports Golf from 5pm on Thursday

The first women’s Major of the year, the Inspiration, takes place this week at Mission Hills Country Club in Rancho Mirage, California, where US superstar Lexi Thompson looks the best bet to finally return to the winners enclosure.

Thompson has sometimes struggled in the biggest events – one Major win is a slim return for someone of her talent – but she has always played well at Mission HIlls, finishing no worse than seventh in five of the six years since she waltzed to a three-shot victory over Michelle Wie in 2014.

The 26-year-old would almost certainly have won this title twice were she not assessed a controversial four-shot penalty for incorrectly marking her ball and subsequently signing an incorrect scorecard in the 2017 tournament, eventually losing to So-Yeon Ryu in a playoff.

While Thompson has not won on the LPGA Tour since 2019, there was a lot to like about her performance at last week’s Kia Classic, where she fired the the joint-lowest score over the weekend to share the runners-up spot behind Inbee Park, a position she also filled when second behind Nelly Korda at the Gainbridge in February. She is ready to win again.

While Thompson was the real eye-catcher at the Kia, Stacy Lewis is another who finished well in Carlsbad and the 36-year-old looks primed to challenge for a title which she won in 2011.

Lewis, who closed with a 65 to record a top-ten finish on Sunday, is comfortable at Mission Hills, finishing fourth when defending her title in 2012 and subsequently adding three more top-five finishes, including when fifth in the 2020 Inspiration.

The 36-year-old showed she can still compete at the top level by winning the Scottish Open last year and her recent efforts – eighth at the Gainbridge and seventh at the Kia, mark her out as a value bet at the prices.

Is Aguero the best striker in Premier League history?