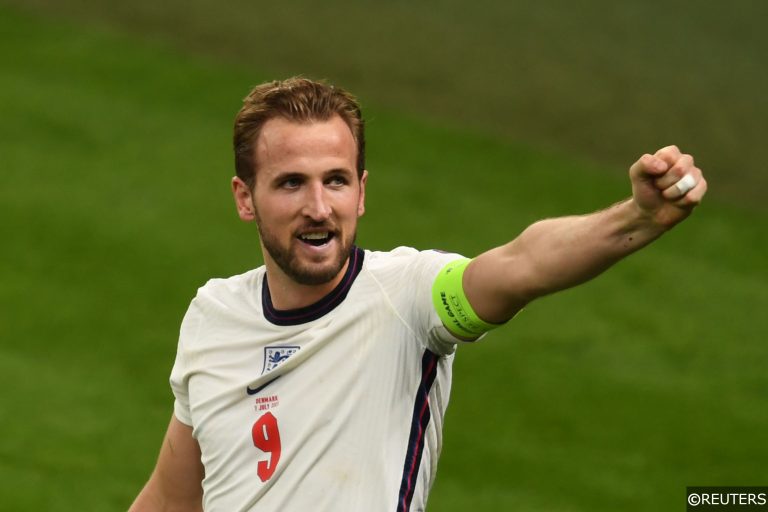 England head to Italy in the Nations League on Friday as Gareth Southgate’s men play their penultimate fixture ahead of the World Cup in Qatar.

We’ve already covered the fixture in our dedicated Match Predictions section, and now we’ve put together this huge 104/1 Ultimate Bet Builder tip with four player bets – which you can back below.

Harry Kane could potentially equal or break Wayne Rooney’s England scoring record this weekend and the Three Lions skipper can add to his 50 international strikes with a goal in Italy. Kane heads into the international break in good form with six goals in seven Premier League games this term, and will be on spot kick duties in Milan.

Bryan Cristante to be shown a card

Roma’s Bryan Cristante has two yellow cards in nine games this season and has one booking in four Nations League appearances for the Azzurri. The 27-year-old is averaging 1.3 fouls per-game in Serie A, 2.5 in the Europa League and 1.8 for Italy in the Nations League so looks a good candidate to be shown a card on Friday.

Jude Bellingham to have one or more shots on target

Borussia Dortmund midfielder Jude Bellingham looks set for an England start with Kalvin Phillips missing and Jordan Henderson lacking fitness. At a big price, the youngster appeals to test the keeper at least once after a strong start to the season with BVB. Bellingham has shown he is capable of performing in big games as he has two Champions League goals this term, including an effort against Manchester City, so he can register an attempt on goal in Italy.

Nicolo Barella to have one or more shots on target

Nicolo Barella has one goal in two appearances in this competition for Italy and, like Bellingham, is a big price to register an attempt on target. The Inter Milan playmaker has two goals and two assists in Serie A this term and averages exactly one shot per-game in the league, getting 0.6 of those on target. In last summer’s European Championships he averaged 0.3 shots on target per-game for Italy and in the Nations League that rises to 0.5, so back him to test the keeper when England visit.