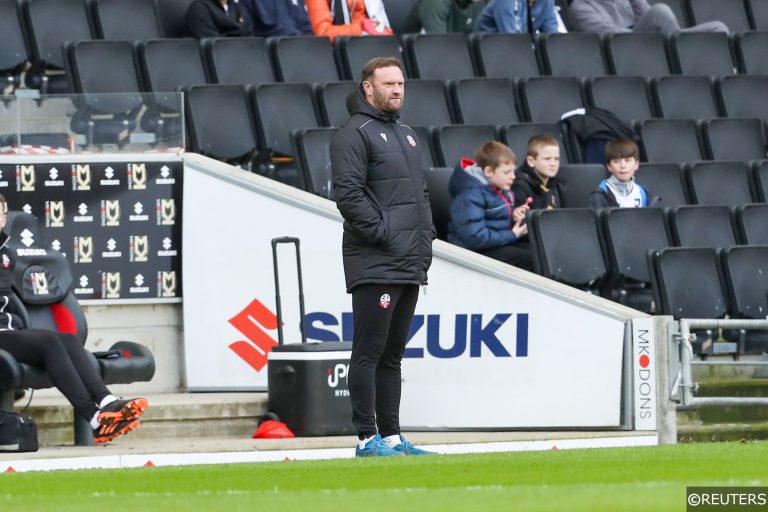 The opening round of 2022/23 League One fixtures are just around the corner and we’re here to preview the action for you with our outright betting tips.

As for the team changes this time around, Derby County, Barnsley, and Peterbourough were relegated from the Championship last season, while Forest Green Rovers, Port Vale, Bristol City, and Exeter City all secured promotion from League Two.

The entertainment value of this division simply cannot be understated as it wasn’t until the final day of 2021/22 that matters of the title, promotion, top-six and relegation were settled. Deciphering the puzzle that is League One is indeed a challenge as a host of fallen giants such as Sheffield Wednesday, Derby, Bolton, Portsmouth and more jostle to escape the third tier.

Sheffield Wednesday are arguably worthy favourites having lost out on promotion only via a play-off defeat while managing to strengthen their squad with the likes of sturdy reinforcements Will Vaulks and Michael Ihiekwe. However their price leaves much to be desired and we are prepared to take a risk on what we consider to be a better value proposition than the Owls at a skinny 9/2.

Also at the top end of the market are Derby County, despite the fact that their squad has been decimated and rebuilt late in the day. Given the off-field drama and heavy rotation of players and staff, we are left with more questions than answers when it comes to the Rams, casting doubt over their title chances at a rather short price of 7/1.

The likes of Ipswich, MK Dons and Peterborough are also worth a mention in regards to the title race, although we feel the true value lies elsewhere.

Highlighting the significant improvement throughout the 2021/22 campaign, only two sides picked up more points than Bolton Wanderers in the final 20 rounds (W12, D5, L3), a run which saw the Trotters rise from the lowly depths of 18th to an eventual ninth placed finish.

Manager Ian Evatt has done a good job of keeping his squad together over the summer while bringing in a couple of smart signings in Jack Iredale and James Trafford who will help shore up the defensive flanks ahead of the new campaign.

Leading the way in terms of goals will likely be in demand Trotters frontman Oladapo Afolayan, the reported Rangers target hit a career-best 12 league goals during 2021/22 although the fiery forward was also booked 11 times, that’s a considerable 25% of his appearances!

Taking the Trotters each way seems to be the smart play here with the tempting double-figure odds providing some sensible profit if Bolton can at least hit their own expectations of making the play-offs comfortably.

The departure of 20-goal man Scott Twine and solid centre-back Harry Darling was indeed a blow for last season’s third-placed finishers MK Dons, but only the brave will underestimate them this time around.

With the keen eye of sporting director Liam Sweeting looking over the comings and goings this summer, MK Dons have already begun to reinvest a portion of the estimated £5.5m that they received for the departed duo.

Liam Manning has successfully cut his managerial teeth in England with a commendable 1.87 points per match on average during his MK Dons reign to date (W30, D11, L13), and it is that level of consistency that will likely see them secure a top-six berth for a second season running.

After clinching the League Two title on the final day of what was arguably Forest Green Rovers’ best ever season despite an end of season slump (D2, L2), drama ensued as Watford poached their manager Rob Edwards in controversial fashion before going on to lose two of their key players in Kane Wilson and Ebou Adams.

Picking up the reins is Ian Burchnall, a young, promising coach who led Notts County to a fifth-placed finish in the National League last term. However his appointment comes with risks as this is his, and Forest Green’s first taste of League One football.

There are seven clubs at shorter prices for the drop, yet we’re backing the Green Army to make an immediate return to League Two at an attractive 11/4, the Vegans can expect choppy waters as they enter uncharted territory in League One.

Perennial challengers Oxford United ended last season with a respectable 76 point haul, which would usually be enough to secure a play-off position although the heightened level of competition last term denied them the privilege.

Oxford’s goal poaching frontman Matt Taylor hit 20 of their 82 league goals last term, propelling his side to the brink of glory. Only six League One players contributed a higher portion of their 2021/22 team goals than Taylor’s 24% and a similar reliance on his efforts in another promotion push could see him at the top end of the scoring charts yet again.

Outside of our main selection, keep an eye out for Cheltenham’s Alfie May at 20/1, his 23-goal haul last term was a career best and his goals could be crucial in their survival bid, while Peterborough star Johnson Clarke-Harris’ (7/1) and Sheffield Wednesday hitman Michael Smith (12/1) are also likely to be amongst the Golden Boot contenders.