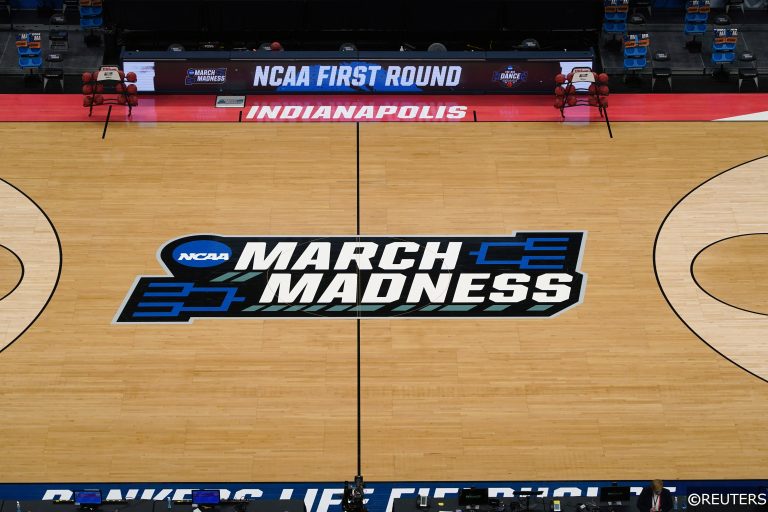 The first two rounds of the NCAA’s men’s basketball tournament have given ample demonstration of where the term March Madness came from.

Not only does the it describe the excitement over the 64-team basketball jamboree, and the accompanying betting frenzy, but crazy things can happen on the court too, as has been the case this year.

March Madness: The story so far

Only one eighth of the bracket is going to plan with the first seeds meeting the fourth seeds at the Sweet Sixteen stage – that’s in the East, where top seeds Michigan are set to meet Florida State.

But the third seeds in that section, Texas, went out in the first round, while the West is already missing its second, third and fourth seeds after the exits of Iowa, Kansas and Virginia.

The second and fourth seeds are already at home in the South, with Ohio State stunned by 15th seeds Oral Roberts in the signature shock of the first round, when Purdue lost to 13th seeds North Texas.

The MidWest is the only region missing its top seeds, with Illinois having been shocked by eighth seeds Loyola-Chicago in the second round. Second seeds Houston are the only top-four survivors in the section with Oklahoma State and West Virginia also eliminated.

With the dust settled on the first two stages, the only unbeaten team in the tournament, Gonzaga Bulldogs head into the last-16 stage as the clear market leaders, with South top seeds Baylor Bears second favourites and Michigan, Houston and Alabama next in the market.

Those seeking an outright interest at this stage should look to Baylor as a value bet. After going 22-2 in the Big 12, they saw off Hartford as expected in their opener then proved too classy for a dogged Wisconsin team in a 76-63 second-round success.

Baylor can boast NBA-calibre prospects, with point guard Jared Butler a consensus All-American selection this season while Davion Mitchell, the Big 12 defensive player of the year, leads the Bears in assists.

The Bears are great three-point shooters and have plenty of strength in depth. They are also an experienced unit with two seniors and three juniors in their first-choice line-up. That maturity will come in handy in the high-pressure final stages.

A couple of underdogs who look worth supporting on the Sweet Sixteen card are Oregon State, who take on giant-killers Loyola-Chicago on Saturday, and Oregon, who meet USC on Sunday.

Oregon State Beavers look a value bet getting a start of 6.5 points thanks to the hype surrounding Loyola-Chicago following their upset win over top seeds Illinois. The Beavers hammered fifth seeds Tennessee 70-56 in the first round and led virtually throughout against fourth seeds Oklahoma State in an 80-70 victory. They are at least good enough to keep this contest close.

Oregon Ducks take on fellow Pac-12 team USC who, like Loyola-Chicago, may be overrated after their impressive win over Kansas. Oregon had a first-round bye when VCU were forced to withdraw, but they showed no signs of rust when beating second seeds Iowa 95-80. The Ducks have impressed since Will Richardson returned after a mid-season hand injury and their campaign may not be over this weekend.

Povetkin vs Whyte: Where to watch and betting tips