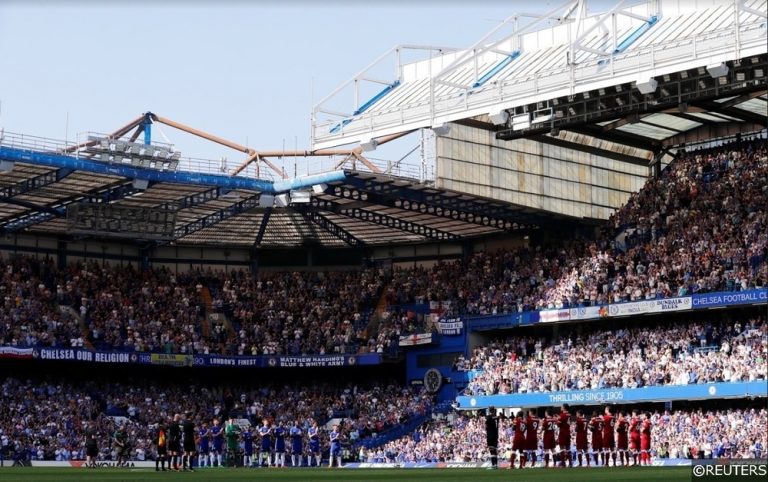 There are three Premier League games on Thursday night as relegation-threatened pair Everton and Burnley are in action, while Chelsea will look to bounce back against visitors Leicester after their FA Cup final heartache.

Everton face a tough home game against a Crystal Palace side who have already beaten them twice this season and Burnley take on Aston Villa for the second time in just 12 days.

We’ve picked out a player to be shown a card from each fixture and together these selections make up a 39/1 treble.  Read on to see our selections and to back our bet.

Best Bet: Mason Holgate to be shown a card at 11/4

Everton defender Mason Holgate is a big price to be shown a card considering the number of bookings he has picked up of late – and the number of fouls he has committed.  Holgate has two yellow cards in his last four games and going back a bit further has four in his last seven.  The 25-year-old averages 1.1 fouls-per-game overall, and over his last 10 games that figure has slightly increased to 1.3.  Everton are fighting for survival and that may lead to a few players picking up cards on Thursday, particularly if they are unable to lead, and Holgate looks an excellent option to be booked in this fixture.

Burnley are the team in greater need in this clash as, like Everton, they are fighting to retain their top flight status, so we’ve picked out a Claret to be shown a card here and midfielder Jack Cork appeals.  The 32-year-old was booked in back-to-back games last month and has four yellow cards in 18 Premier League appearances in total this season.  Cork has committed at least one foul in 12 of his last 15 PL games, with 24 in total during that time at an average of 1.6 per-game and as such looks a contender to be shown a card at Villa Park.

Leicester defender Wesley Fofana has two yellow cards in his last three appearances, against Everton in the league and Roma in the Europa Conference League.  The 21-year-old is likely to keep his starting spot after the 5-1 thrashing of Watford last time out and looks a contender for a booking as he has two yellow cards in just five Premier League games.  Fofana averages 1.2 fouls-per-game and is yet to make a PL appearance without committing at least one, so he could find himself going into the referee’s notebook at Stamford Bridge.