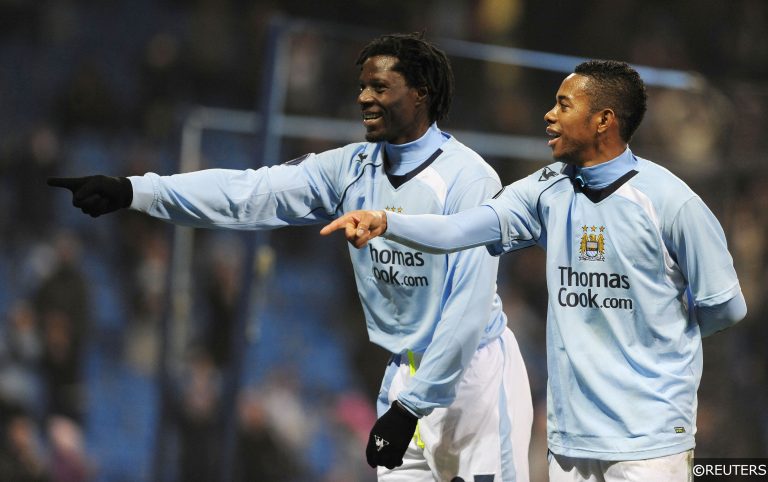 In our “what ever happened to” series, we take a look back at some of the flash in the pan Premier League players who made their mark in England’s top flight before disappearing into the footballing ether.

Footballers from all corners of the world have showcased their skills in England’s top tier, though some player’s impact was longer-lasting than others.

From the comedically bad to the utterly bizarre, we recount the days of some of the division’s most fleeting protagonists in our recurring series.

Check out our latest entries below.

Zimbabwean centre forward Benjani must be one of the luckiest guys to ever kick a leather sphere in anger.

Auxerre took a punt on him in 2002 after the forward had netted a paltry three goals in 32 games for Grasshoppers in Switzerland, and after an underwhelming stint in France (where he scored about once every five games), Portsmouth manager Harry Redknapp decided to gamble on the Zimbabwean “hitman” in 2005.

Benjani didn’t pull up any trees in his first two seasons at Fratton Park, but then had a “Papiss Cisse” style streak and battered in enough hit and hopers in the first half of the 2007/08 campaign to earn a £3.25 move to Manchester City under Sven Goran Eriksson in the February.

Despite a debut goal in the Manchester derby at Old Trafford, it turned out that Benjani was actually pretty rubbish, notching just seven goals in 31run outs for the Citizens overall.

To his credit, he hung on in there at generous remunerators City, collecting his enormous and completely undeserved pay packet until his contract ended in 2010.

Blackburn signed him upon his release, but alas his continued uselessness prevented him from succeeding, and the striker scored just three times in 21appearaneces for Rovers.

In 2011, Pompey took him back for another year where Benjani continued to “wow” supporters, smashing in a solitary strike in 18 games.

That was enough English football for Benjani, who disappeared off to the South African league in 2012 where he scored once in 23 appearances for Chippa United and Bidvest Wits before retiring in 2014.

Hleb was actually pretty nifty wasn’t he? So nifty in fact, that Barcelona splashed out €15m to sign the languid Belarussian from Arsenal in 2008.

The talented technician had established a reputation as a major creative force at Arsenal, though Hleb’s failure to nail down a regular place at Barca seemed to shatter his self-belief, and after leaving the Camp Nou, the midfielder tumbled down football’s rabbit hole.

Despite his itchy feet at club level, Hleb continued to be an inspirational figure for Belarus on the international stage, amassing 80 caps for his country before his retirement in 2019.

Crafty Brazilian schemer clichés aside, Elano was a talented midfielder who joined the early Man City financial revolution in 2007, following an impressive stint in the Ukraine with Shakhtar Donetsk.

Elano enjoyed a productive first season in Manchester, reaching double figures for the campaign and although his second season was less impressive, he was still a regular for Brazil and his career looked in pretty good shape.

The Brazilian with an eye for a screamer left City to move to Galatasaray in 2009, but by his second season in Turkey, he was beginning a steady downward trajectory.

In 2011, he separated from his wife and moved back to Brazil and that was the same year he made his last appearance for his country.

Between 2011 and 2014, Elano club hopped between Santos, Gremio and Flamengo before moving to India to play for Chennaiyin, signing a 3 month deal for a reported $1m.

After his lucrative spell in the Indian Super League, where he scored eight times in 11 appearances, Elano returned to his homeland with Santos for half a season, before deciding he needed to flesh out his bank account at Chennaiyin again in 2015.

Elano eventually retired with Santos in 2016.

Most will remember Baros from his spells at Liverpool and Aston Villa between 2002 and 2007, where the Czech striker spent most of the time looking at his socks and running down blind alleys.

Baros scored a combined 41 goals in 159 matches for the aforementioned Premier League clubs before moving to France for two underwhelming years with Lyon, starting in 2006.

The attacker spent the second half of the 2007/08 campaign on loan at Portsmouth where he helped the club to their famous FA Cup victory, though Baros failed to score a single goal in his 16 appearances on the south coast.

After his final foray into English football, Baros moved to the famous Premier League retirement home at Galatasaray, where he rediscovered his scoring touch, netting 25 times in his first season in Turkey and 16 in his second.

Baros scored a noteworthy 60 goals in 110 games for the Istanbul giants overall, though things turned a little pear shaped for him after that.

After he failed to score at Euro 2012, Baros retired from international football and moved to Banik Ostrava in his homeland – the club where he started his career.

From there, Baros embarked on a Hleb style rebound tour, returning to Turkey with Antalyaspor in 2013, before rejoining Banik Ostrava again a year later.

Following another 12-month spell at his home-town club, Baros played for Mladá Boleslav and Slovan Liberec between 2015 and 2017, before settling back at…..you guessed it – Banik Ostrava. And that’s where the 38-year still plies his trade today.