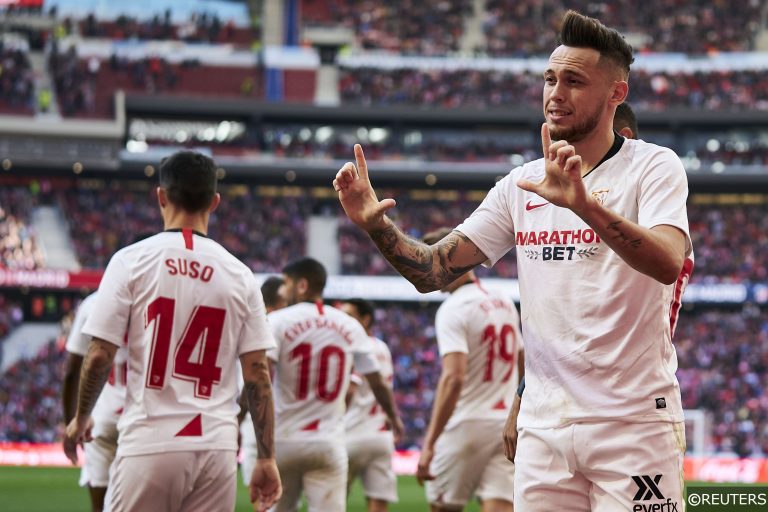 Spanish fútbol makes its comeback with the resumption of the 2019/20 La Liga season later today – and the campaign will restart in explosive fashion with Sevilla’s El Gran Derbi skirmish with Real Betis kicking off at 9pm this evening.

3rd placed Sevilla claimed maximum points along with local bragging rights in each of their last two clashes with their bitter city rivals, and a hattrick of derby victories would help to strengthen their hold on a top four place.

Los Verdiblancos in 12th, don’t hold such lofty aspirations, though they will be desperate to restore some pride this week having been turned over in successive derby fixtures in disappointing style.

Read on to discover FST’s best bets, key stats and latest odds for the El Gran Derbi tussle between Sevilla and Real Betis.

Check out our Spanish football expert’s Sevilla vs Real Betis predictions to read their betting tips for the game.

High-flying Sevilla toppled Real Betis 2-1 in their own backyard in November, and having lost just once in 16 matches at the Estadio Ramón Sánchez Pizjuán, they have the momentum and proven consistency to complete the double over their local rivals.

With a return of just one win from 13 La Liga away assignments since August last year, Betis are one of the division’s worst performing travellers and should find the going tough on the road again this evening.

While Sevilla’s home record in terms of results remains excellent, their propensity for conceding goals at the Estadio Ramón Sánchez Pizjuán remains. In La Liga, Los Nervionenses shipped at least one goal in six of their last eight matches on their own turf, and having conceded in each of their last six meetings with Real Betis, we think a goal is on offer for the visitors this evening.

Betis’ chances of keeping their hosts out at the other end look incredibly slim however. Rubi’s men managed to keep their opponents off the scoresheet just twice in their last 15 La Liga runouts, and only two clubs in the division have conceded more goals overall in 2019/20.

Argentine forward Lucas Ocampos has enjoyed a prolific season for Sevilla, and the 25-year-old has already bagged 10 Liga goals this term, one of which was plundered in the last El Gran Derbi meeting between Sevilla and Real Betis earlier last year.

In the run up to the campaign’s postponement, Ocampos had scored in three La Liga fixtures on the spin, and the former Milan and Marseille star will be itching to get straight back into the goalscoring groove in the derby.

Ocampos features in our La Liga goalscorers to watch out for guide – check out the rest of list of marksmen to keep an eye on here.

Fernando to get booked

Hard-hitting Sevilla anchorman Fernando has been the club’s chief purveyor of punishment this season, and the 32-year-old will be sharpening his studs ahead of tonight’s derby.

The veteran anchorman has already been booked 10 times in La Liga in 2019/20, and the former Man City destroyer was carded when Sevilla battled their way to a 2-1 win over Betis in November.

Find out where you can watch Sevilla vs Real Betis, plus all the latest team news and probable lineups here.

Andres Guardaro to get booked

Veteran Mexican midfielder Andres Guardado has drawn the ire of officials in La Liga on numerous occasions already this season, and in total, the 33-year-old has amassed nine yellow cards in just 18 Primera Division starts in 2019/20.

Incredibly, six of Guardado’s cautions were picked up inside his last nine top-tier appearances and we think the experienced international is among the prime candidates to land himself in trouble with the referee again in Thursday’s derby.

A five-fold accumulator featuring our individual selections above is available at a whopping 40/1 with Betfair’s OddsOnThat. You can back them all by clicking the banner below!