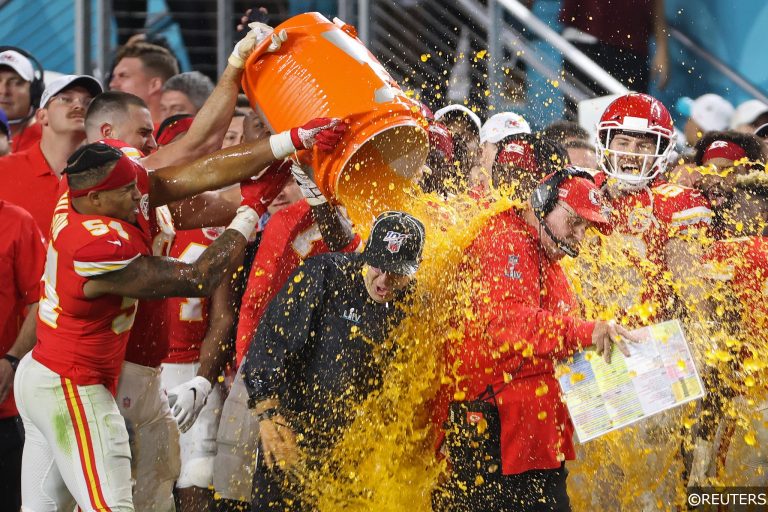 With the NFL regular season over and the play-offs set to begin this weekend, it’s time for an update on our Super Bowl LVII predictions as we head into the business end of the NFL season.

Super Bowl LVI runners-up the Cincinnati Bengals are fifth-favourites to be crowned Super Bowl LVII champions at 7/1, with Kansas City Chiefs favourites at 7/2, closely followed by the Buffalo Bills, the Philadelphia Eagles and the San Francisco 49ers.

With the Kansas City Chiefs effectively inheriting the number one seed from the Buffalo Bills following the cancellation of their Week 17 clash with the Cincinnati Bengals, they now get to spend Super Wild Card Weekend at home, an advantage that once again makes them the team to beat on the AFC side of things.

However, they lost to both the Bills and Bengals this season, and it’s the last-named team who are fancied to make it back-to-back Super Bowl appearances, having just fallen short to the L.A Rams last February.

Following a slow start to the season, the Bengals have really got their act together, winning eight straight, with their last defeat coming back on November 1st, and that number would almost certainly have been nine as Joe Burrow was in the process of making a statement against the Bills in Week 17, and giving MVP voters something to think about, when that contest was tragically brought to an early end.

Protecting Burrow was an issue last season, so losing right tackle La’el Collins to injured reserve hurts, but Cincinnati has won three straight versus the Chiefs, including last season’s AFC title game, and they appear on course to meet again later this month, with their playoff journey beginning with round three versus the Ravens on Sunday.

The NFC can’t boast the quarterback riches of the AFC, but it houses arguably the two most complete teams in the playoffs in the form of the one seed Philadelphia Eagles, who won’t be seen until the Divisional Round, and two seed San Francisco 49ers.

The Eagles had looked like the team to beat for much of the season but a Week 15 injury to QB Jalen Hurts derailed their momentum, and even in his hurried return in Week 18 versus the Giants, they failed to flow on offense against back-ups.

Having a week off to reset could be what is needed, but even then they could be in trouble if/when they run into the 49ers, who are riding a 10-game winning streak into the playoffs behind rookie QB Brock Purdy, the 262nd and final pick of the draft who has been at the helm since Jimmy Garopolo went down in Week 13.

There’ll be a movie made if he wins the Super Bowl, and make no mistake, it’s possible with head coach Kyle Shanahan pulling the strings of a lethal offense featuring the likes of Deebo Samuel, Christian McCaffrey, Brandon Aiyuk and a rejuvenated George Kittle.

Led by a smothering defense, all the 49ers need Purdy has to do is distribute the ball and avoid turnovers, which he’s been good at doing until this point, and they rate a strong bet to win the NFC, with their route to a potential clash with the Eagles starting at home versus the Seattle Seahawks on Sunday.

Joe Burrow is ‘the man’ but he couldn’t overcome protection issues against the Rams in last season’s Super Bowl and, if my above predictions are correct, he’ll be facing another stellar defense in this year’s finale.

Get your cinema tickets booked in early as ‘Mr Irrelevant’ the movie is happening after Brock Purdy, the last pick of the draft, wins the Super Bowl in his rookie season with the San Francisco 49ers.