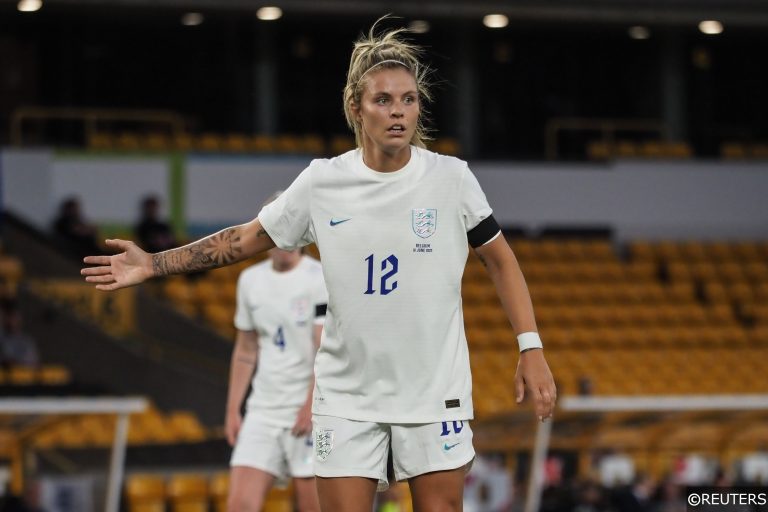 It has been delayed by a year but the upcoming UEFA European Women’s Football Championship, which begins next month, should be well worth the wait.

England will be hosting the tournament, which will feature 16 teams competing across eight host cities at some of the countries most iconic venues from Old Trafford to St Mary’s Stadium to Wembley, where the final will take place on Sunday 31st July.

Where to watch & when it starts

The action gets underway on Wednesday 6th July with hosts England taking on Austria in the curtain-raiser in Manchester.

Throughout the tournament, matches will be available to watch on BBC One, BBC Two and BBC iPlayer.

It is not often England find themselves near the very top of the betting for a major international tournament but bookmakers have only Spain, who are 7/2 shots, above the Lionesses in the outright market.

Made up of a number of players from a Barcelona team who won all 30 of their league matches last season and reached the final of the Women’s Champions League, it is no surprise to see Spain as favourites.

But while they could go far and possess a world-class talent in midfield in Alexia Putellas, Jorge Vilda is without a key component of the team in Jennifer Hermoso, who is ruled out injured, and the Women’s Euro 2022 could instead be England’s time to shine.

The Lionesses squad is loaded with talent from arguably the best women’s top flight in the world in the Women’s Super League from Arsenal’s Beth Mead and Leah Williamson to Chelsea duo Millie Bright and Fran Kirby.

Hosting the tournament is naturally a big help for England and one person who knows a thing or two about capitalising on home advantage is Sarina Wiegman.

England head coach Wiegman, who has been in the job since September last year, won the last Women’s Euros with the Netherlands, who also hosted the event, in 2017.

She is a great tactician with a deep squad at her disposal and England could be in their best-ever position to land a European Championship title.

Katoto can star for France

Although England could lift the trophy at Wembley next month, their range of attacking options means no one player stands out in the top goalscorer market.

Similarly for Spain, Esther Gonzalez could be battling with Putellas and Claudia Pina for the goalscoring accolade in the absence of Hermoso and although Vivianne Miedema of the Netherlands always makes appeal, the best bet could instead be Marie-Antoinette Katoto of France.

Sure to be one of the stars of the tournament, PSG’S Katoto will act as the focal point of France’s attack this summer and impressed on the biggest stage for her club last season, bagging seven goals in the Champions League.

For her country, meanwhile, Katoto has struck 24 goals in 28 matches with five to her name already in 2022.

Netherlands stand out in Group C

The odds suggest Group C will be the most competitive group at this summer’s Women’s Euros with the Netherlands, who are 4/5 to win the section, and Sweden, who are 5/4 to come out on top, tough to separate.

And while the Dutch were not at their imperious best at the Tournoi de France earlier this year, they are the overall better side and this squad knows what it takes to perform at major tournaments.

At Euro 2017, they won all six of their matches in normal time on their way to the trophy before finishing as runners-up to the USA at the World Cup three years ago.

Their squad is largely unchanged since with Sari van Veenendaal still between the sticks, Dominique Janssen marshalling the defence and Sherida Spitse anchoring the midfield.

That experience and the quality of Miedema, one of the finest strikers in the world, should give them the edge over the Swedes, who have been held by the likes of Italy and Ireland in internationals earlier this year.