Manchester City have looked unstoppable in the Premier League this season. They have been playing with class and flair the majority of the time, but have still managed to grab a goal when things weren’t going to plan.

This was evident in their match against Crystal Palace, where they struggled to break them down and looked to be heading for a goalless draw. But their winning mentality shone through, and a 90th minute goal from young striker Kelechi Iheanacho got them the win.

This wasn’t the case in their bogey competition though. An out of form Juventus came to the Etihad on Tuesday having not won all season, but they managed to come away with a 2-1 victory over the hosts.

But Manchester City didn’t get to where they are without being able to bounce straight back on the horse after a fall, and I expect they will do that against West Ham.

West Ham have managed to pick up back to back wins in the Premier League, first beating Liverpool 3-0 at Anfield and then defeating Newcastle 2-0 thanks to a Dimitri Payet brace.

This takes them to nine points for the season, which is a good return considering they have played Arsenal, Liverpool, and the in form Leicester.

Andy Carroll could be back on the turf for the trip to Manchester City, but Enner Valencia, Alex Song, and Pedro Obiang are going to miss the trip. Mauro Zarate and Joey O’Brien are back in training, but are unlikely to be risked so soon after their recovery.

Manchester City captain Vincent Kompany is expected to be ready for a return after going off against Juventus, and Sergio Aguero should be fully fit as well. Pablo Zabaleta, Gael Clichy, and Fabian Delph are all still out though.

Manchester City have won all of the last seven meetings between these sides, with five of those being by two goals or more. This makes a Manchester City -1.5 Asian Handicap win look great at odds of 1.675. 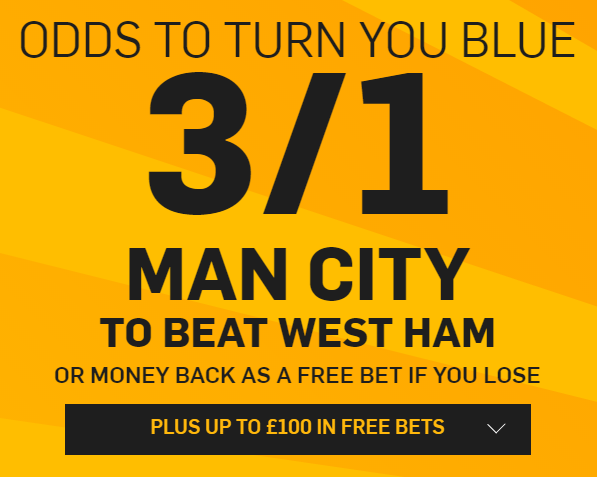