Saturday afternoon should be an entertaining one for England fans as they watch their group topping side face the basement dwellers and perpetual minnows San Marino. It’s more a question of how many than anything else, but we’ll still take the tough Asian Handicap line in this contest, we’re expecting this England team to score plenty of goals.

It was “only” a 5-0 win when these two sides met in England, but the group leaders will be feeling less pressure here and they’ll also be feeling a lot more comfortable as a team. Roy Hodgson does have the tendency to put the reins on at times, but this young side has shown more “attacking scrap” than many of the more recent versions of England. We really expect a different kind of thrashing from a side that has scored 10 goals in their last three games against a couple of the group’s better opposition.

San Marino have scored zero goals and conceded 19 in six games so far. They did earn a 0-0 draw with Estonia, but they lost 4-0 at home to Switzerland and were lucky not to lose by more than 2-0 when Lithuania visited in a recent clash.

Sometimes there’s a gut feeling about a side. Right now, it feels like there are goals in games for England and we expect that to be true again tonight.

Would you really bet on them not conceding five or more goals?

It’s always tricky to find strong odds in games where there is such tremendous disparity, and the Asian Handicap 5.0 line at least protects you from losing your stake money if England “only win 5-0”. 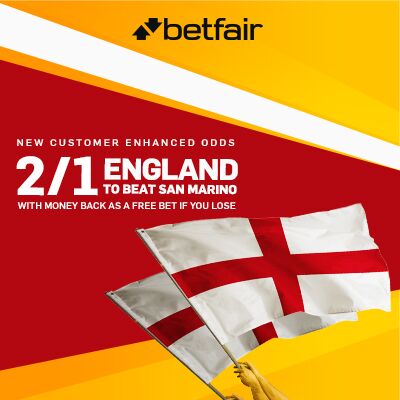