Where do you start with Sunderland? After avoiding relegation by the skin of their teeth last season it doesn’t look like any of their players have learned a lesson.

They have lacked any sort of passion, determination, organisation, or creativity in the opening stages of the Premier League.

Nine matches in and they are the only team in the league without a win, having lost six of their nine games and picked up three points from draws against West Ham, Aston Villa, and Swansea.

Defensively they are shocking. They have conceded 19 goals in their nine games so far, with the only team worse off than them is Norwich after their 6-2 defeat last week.

Newcastle aren’t any better defensively though, with them also conceding 19 league goals already this season.

This leaves them both in trouble, with Sunderland sitting rock bottom of the table and Newcastle’s win last weekend moving them up to a slightly less perilous 18th position.

But the 6-2 win over Norwich will have boosted Newcastle’s morale significantly. It ended their wait for their first Premier League win of the season and was a welcome break after their 6-1 defeat to Manchester City the weekend before.

Georginio Wijnaldum bagged four goals in this match to take his season’s tally to six goals, which is only two fewer than the whole Sunderland squad have scored this season.

There aren’t any new injury concerns for either team at the moment. Newcastle still have a huge six men missing through injury, with the most notable absences being Tim Krul and Rolando Aarons. Sunderland are only missing Ola Toivonen.

This is always a heated fixture with a roaringly aggressive crowd. This isn’t going to be made better with the likes of Aleksandar Mitrovic and Lee Cattermole present. These two sides have seen 41 yellow cards and four red card dealt to them in their combined 18 matches so far, and that average is expected to increase due to the derby day tension. I think odds of 1/1 for an Over 5.5 Cards bet is really good value. 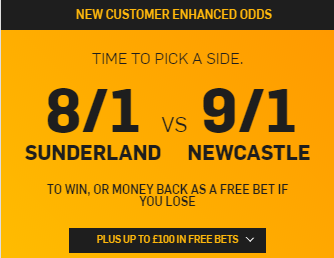