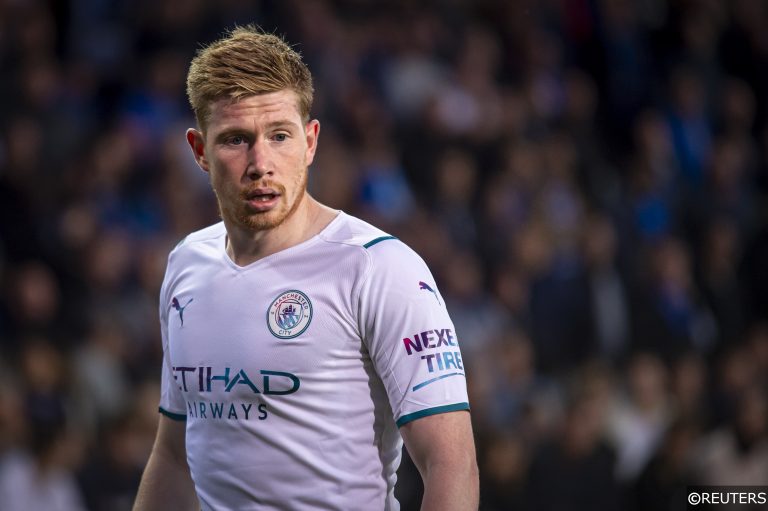 Manchester City head to Real Madrid for the second leg of their Champions League semi-final tie holding a 4-3 lead after last week’s win in the first meeting.

The seven-goal thriller in Manchester was an absolute classic and we came agonisingly close to landing a 90/1 Ultimate Bet Builder as four of our five selections came in.

I’ve used a few selections from our Match Prediction to come up with this five selection bet for the second meeting, which is priced up at a huge 105/1.

City won the first leg 4-3 and perhaps should have won by a bigger margin. The Premier League leaders dominated possession and created more chances, and they can finish the job with a win at the Bernabeu.

Kevin De Bruyne opened the scoring in the first leg and he can be one of City’s heroes again in the return fixture. The Belgian has five goals in his last eight games and relishes the big occasion, having hit what proved to be the winner in the previous round against Atletico Madrid as well as scoring in the 2-2 draw with domestic title rivals Liverpool last month.

Riyad Mahrez has arguably been City’s best player in the Champions League this term with six goals and two assists in 11 appearances. The Algerian was left on the bench for the win over Leeds at the weekend and should come back into the starting XI in Madrid and can make an impact.

Mahrez has two assists in his last three games, including one in the first leg, and looks an excellent price to set up a team-mate on Wednesday.

We’re anticipating Los Blancos to get on the scoresheet and Karim Benzema is the standout candidate to add to his huge Champions League haul this season. The Frenchman scored twice in the first leg to take his European tally to 14 goals in 10 games, and he managed a strike against Espanyol at the weekend despite the fact he only entered the action as a second half substitute.

Eder Militao to be shown a card

Real defender Eder Militao has three yellow cards in 10 appearances in the Champions League and has been booked twice in his last five appearances overall.  The first leg only produced two player bookings (and one for City boss Pep Guardiola) but there should be a few more cards dished out in the second meeting as desperation starts to kick in and Militao, who averages 1.3 fouls-per-game in the Champions League, looks a contender.