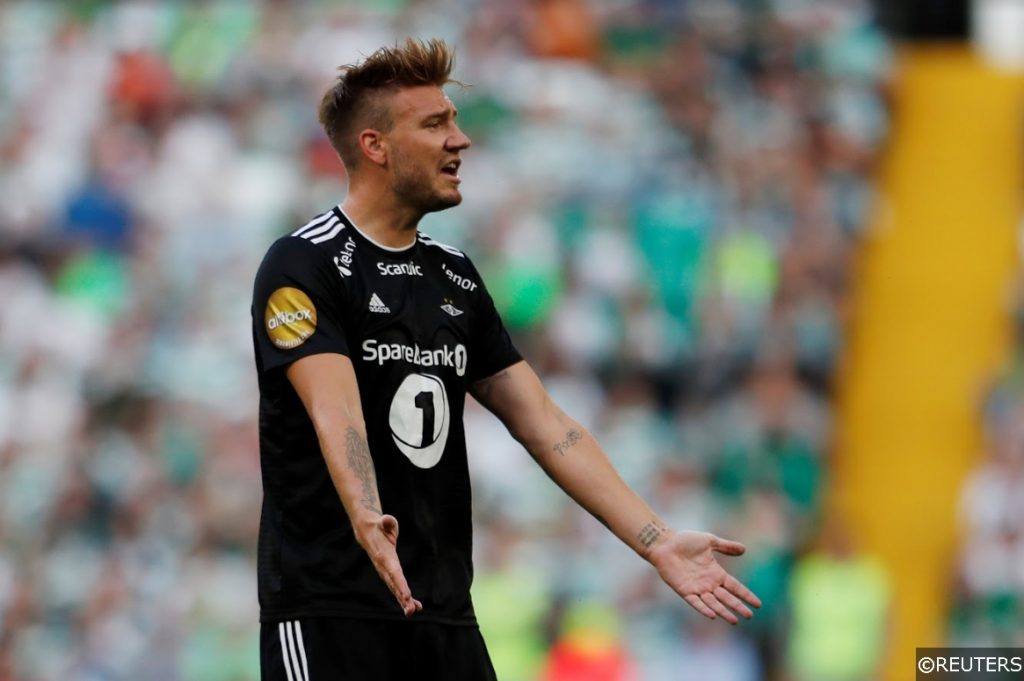 Every virtual manager is different. Some crave instant success and blockbuster FM signings, while others are more interested in building from the ground up. Maybe you’ve taken charge of your own floundering club and realised what a dire financial situation you’re in.

Or maybe you’ve blown your meagre transfer budget on a marquee striker and now need to head to the bargain bin because you’ve realised that you’ve only got one central midfielder and a perennially crocked centre back pairing.

There are many reasons you can find yourself scouring through the free agent listings on Football Manager 2020, and we’re not here to judge. Instead, we’re just here to give you a list of some of the best free agents available on FM20. Combine these with some of our top Football Manager 2020 bargains and you’ll get yourself a squad upgrade for a cut price.

Some of these are worth signing for the nostalgia alone (we’re looking at a certain ex-Arsenal striker), while others could seriously improve your starting lineup for absolutely nothing. Just be careful their agent doesn’t shaft you in the contract negotiations!

Poor Guiseppe Rossi was once touted as the next big thing in football, but things never really worked out for the Italian. He made just five appearances for Manchester United before being shipped off to Villarreal, where he performed admirably for a few seasons before injuries caught up with him. He has made just 259 league appearances since his Man Utd debut 15 years ago and was released by Genoa in 2018. He actually joined Real Salt Lake in real life in February, but he’s available on a free transfer at the start of Football Manager 2020.

As long as you’re willing to put up with an ageing, injury-prone striker who is almost bereft of desirable physical attributes (Natural Fitness of 5, really?) then he does offer a decent technical option. His First Touch (17) is excellent and he has commendable attributes in Dribbling (15), Finishing (14) and Penalty Taking (16).

One of the few (decent) free agents under the age of 30, Marcus Pedersen has spent almost his entire career touring around Scandinavia. An ill-fated spell away from the northern countries of Europe saw him score five goals in 27 appearances for Vitesse and a dismal two goals in 18 for Barnsley. He has fared much better in his native Norway though, and while he’s never going to set the world on fire he’s a decent backup option with plenty of his career still ahead of him.

Former Inter Milan and Newcastle striker, 34-year-old Obafemi Martins has been around the block a few times during his career. Most recently released by Shanghai Shenhua, he’s available on a free at the start of the 2019/20 season providing you’re willing to put up with the fact he’s out for four months with a cruciate ligament injury.

He still operates at a decent level from a technical perspective and his Finishing (15), Technique (15) and Long Shots (14) make him a very good impact substitute.

Any Football Manager veteran will feel a pang of nostalgia upon hearing the name Keirrison. The Brazilian was one of the first names touted around when talking about cheap Football Manager wonderkid strikers back when he was a youngster. But now, aged 30, the former Barcelona man finds himself without a club having made just 10 appearances since 2017. To be fair, Keirrison has pretty much run out of clubs to sign for – he’s played for 11 different clubs in his career but still only made 166 appearances.

Still, his technical attributes are respectable for a lower mid-table club, and considering he’s a free agent he’s well worth signing for nostalgia’s sake alone!

Can you really resist the temptation to sign the icon that is Lord Bendtner?

Released from Copenhagen in December, Bendtner isn’t just a nostalgic blast from the past. He has very respectable attributes for Finishing (14) and Heading (16) and can offer you plenty if you’re playing route-one football. To be honest, though, do I really need to give you any reason to sign him other than to say that you’ll have the Lord leading your line?

Five-time Premier League winner with Manchester United, a 35-year-old Darren Fletcher is still a worthy addition to any dressing room. Sure, his Acceleration now stands at a meagre 5, but he’s still got some decent Passing (14) ability and his mental attributes are off the charts. With excellent Determination (18), Leadership (17) and Teamwork (19) he’s a driving force in the centre of the park. You don’t make 342 appearances for Man Utd without having something about you.

Once compared to Zinedine Zidane, Yoann Gourcuff’s career hasn’t quite taken the trajectory many expected. He’s ended up spending the majority of his career in his native France, barring his rather uneventful two-year spell in Milan back in 2006-2008. His most recent spell at Dijon saw him released after one season having made just eight appearances.

That being said, Gourcuff has been capped by France 31 times and still possesses an array of desirable technical attributes for a key playmaker. His Passing (16), Technique (16), Teamwork (15) and Vision (15) are the standout figures and, providing you don’t expect 90 minutes from him every week, he could do a very good job for a middle of the road top flight club.

A Tottenham academy graduate, Tom Carroll was released by Swansea recently and is a decent addition to any top flight midfield. He has a decent range of technical attributes and, unlike many on this list, he isn’t falling apart at the seams. In fact, Carroll is in his prime at 27 can be a reliable and versatile midfield backup for years to come. Think of him as a bargain basement Harry Winks.

One of the higher quality free transfers available on FM20, Paul-Georges Ntep has excellent standings in the Acceleration (15), Balance (16) and Dribbling (14) department, which is pretty much all you ask for in a winger, right? He’s not a world beater by any stretch of the imagination, but he’s a Cameroon international, he’s just 26 years of age and he’s FREE!

Poor Paul-Georges hasn’t had much luck since he signed for Wolfsburg in 2016. He came in off the back of a relatively successful stint at Rennes in Ligue 1, but since that move he’s made just 28 league appearances and hasn’t seen top flight action since 2018. Give young Ntep a second chance and revitalise his career.

Poor Bicho seems to have slipped through the net in Spain. He’s just 23-years-old, boasts very decent technical and physical attributes and can slot in all across the midfield. Despite this, the unfortunate lad just never got his chance. A Deportivo La Coruna academy graduate, Bicho has never made a top flight appearance and has been farmed out on loan four times, making a grand total of just six appearances for the Deportivo senior team.

Give Bicho his big break and you might be rewarded for years to come.

A former Real Madrid player who was capped over 50 times for Portugal, it’s hard to believe that a 31-year-old Fabio Coentrao is now a free agent. Coentrao never quite fulfilled his potential at the Bernabeu but still possesses an array of impressive technical attributes. Not only that, but he can play anywhere down the left and even has some ability in the centre of the park and the right wing.

He’s a fantastic versatility player and still has a couple of years left in the tank.

Two years ago Ivan Strinic was in the starting lineup in a World Cup Final, and now he finds himself without a club. The 31-year-old left back had his contract cut short last summer after sitting out the majority of last season and, while his physical attributes aren’t exactly mindblowing, the Croatia international is a well-rounded left back who could easily slot into a mid-table Premier League club’s starting lineup.

All in all, Strinic is just a very balanced all rounder who suits the left back berth perfectly.

He might be getting on a bit, but Ignazio Abate still boasts a decent amount of pace and fitness after years occupying the right back berth at AC Milan. Abate’s leadership and work rate make him the perfect addition to the dressing room, and all this comes wrapped in a wealth of top-level experience.

Sure, he’s not the most technically gifted full back you’ll ever come across, but he’s been first choice for AC Milan for almost 10 years and even made 19 appearances last season. Plus, right backs are hard to find on Football Manager 2020, so snap this one up.

Sweden international Alexander Milosevic is a must-sign for any cash-strapped club in need of a centre back. He’s fantastic in the air and surprisingly good on the ball for an unattached centre back. He’s in his prime at 27-years-old and could easily challenge for a starting spot in at least half of the current Premier League sides.

What more could you ask for other than a 35-year-old James Collins to orchestrate your defensive line? The Welshman remains imperious in the air and, due to him never being the most mobile of defenders, his advancing years haven’t quite rendered him useless just yet. In fact, up until last season Collins was still plying his trade regularly in the Premier League and with 279 top flight appearances he brings a wealth of experience to any dressing room.

Absurdly, Collins is also able to play up front, although we’re guessing he’s not going to be the best Trequartista.

Another former Arsenal player tops the list of best free goalkeepers on FM20 having left Sporting Lisbon last summer. The 33-year-old didn’t make a single appearance for the Portuguese club but has years left in his goalkeeping career.

Boasting insane stats in the Kicking (16), Throwing (16), One on Ones (16) and Reflexes (16) departments, he could definitely contend for the number one spot in Premier League sides. The 6″5 Italian is also a commanding presence in the year with his 16 Jumping Reach and 14 Handling.

Unlike many Argentines, Agustin Orion never got his big chance in Europe. He’s spent the vast majority of his career in Argentina with a range of clubs before finally moving abroad in 2017 when he signed for Chilean outfit Colo Colo. They released him in 2019, probably due to the fact he’s almost ready for the retirement home.

That being said, he still has fairly impressive attributes and would be a decent, cheap signing for any manager in need of a short-term backup option between the sticks.