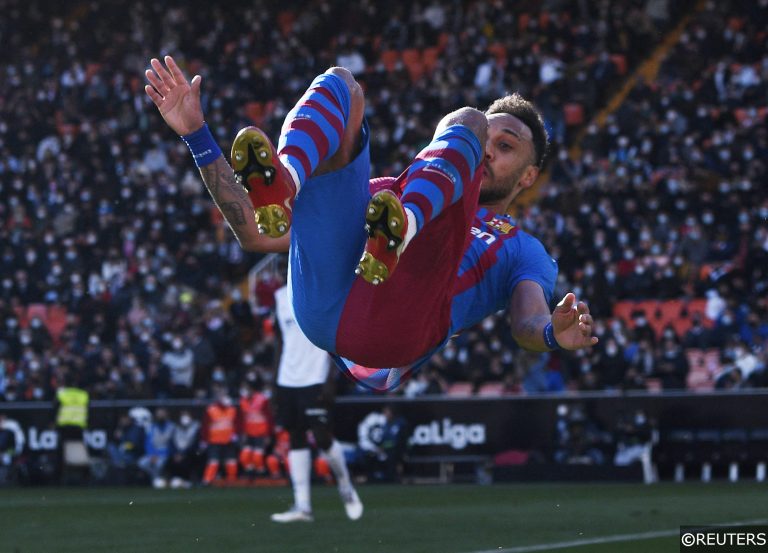 Top flight European football is back this weekend after the international break and here at FST we’ve decided to mark the occasion with another edition of Crazy Odds, where we combine some big price options into one humongous accumulator.

I’ve opted for four selections from four of Europe’s biggest leagues for this accumulator tip, which pays out at a whopping 712,284/1!

These selections may not necessarily match our dedicated Match Predictions. Instead, they are long-shot options at big prices, combined into one massive multiple bet.

The late game in the Premier League on Saturday sees Manchester United entertain Leicester City and the 40/1 on offer for United to be winning at the break and the Foxes to turn it around in the second half has a chance.

United have dropped points from winning positions against the likes of Southampton and Burnley recently – and they took the lead in their FA Cup tie against Middlesbrough before being dumped out.

Leicester have won each of their last three meetings with United and in their most recent clash, a 4-2 win at the King Power Stadium in October, they conceded the first goal. Indeed, in all three of those victories Leicester conceded in the first half so it seems reasonable to suggest they could be behind at the break but still come away from Old Trafford with all three points.

We’re in for a treat in the late kick off in Germany’s Bundesliga as Borussia Dortmund entertain RB Leipzig in a clash that promises goals and entertainment.

There have been 17 goals scored in total across the last four meetings between these two sides. Four of those goals have been scored by BVB’s superstar Erling Braut Haaland, and the first leg of this part of our mega bet relies on him scoring first.

The Norwegian hasn’t managed to add to his account in three games since returning from injury but he did grab three goals in two games during the international break. As mentioned earlier, Haaland tends to enjoy playing against Leipzig and can open the scoring on Saturday.

Inter Milan to miss a penalty at 18/1

There is a heavyweight Serie A clash to look forward to on Sunday as Inter Milan make the trip to Juventus.

Inter Milan have won a penalty in two of their last three games against Juve, but the Nerazzurri don’t have the best of records from the spot this season. Inter have won 10 penalties this season but have missed three of those, so the 18/1 on offer for Inter to miss a penalty has a chance here.

The late game in Spain’s La Liga on Sunday sees Barcelona entertain Sevilla and a win for the Catalan giants would see them draw level on 57 points with the visitors in second spot.

Sevilla have only conceded 19 goals in 29 La Liga games this season but they are winless in eight and will come up against a striker in red-hot form in the shape of Pierre-Emerick Aubameyang on Sunday.

The former Arsenal man has already bagged one hat-trick in La Liga, at Valencia, since making the move from the Emirates and he scored twice against Real Madrid last time out.

Aubameyang comes into this round of fixtures fresh as he wasn’t involved over the international break, and he can pick up where he left off with three or more goals against Sevilla.

In The Mixer: How many trophies will Liverpool win this season?