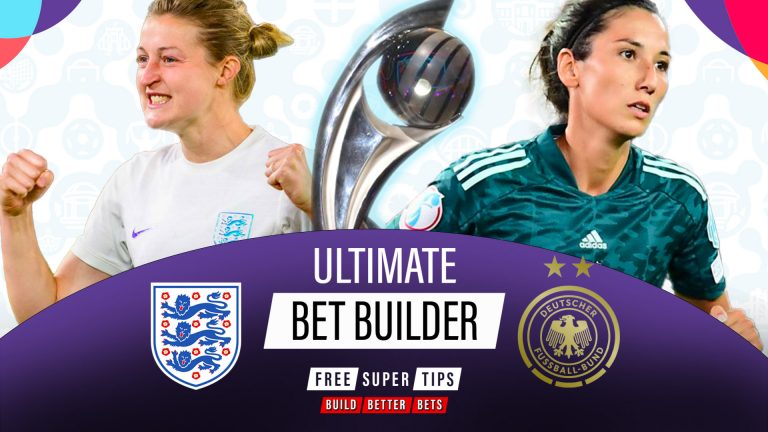 England Women head to Wembley on Sunday evening in a bid to bring a major international trophy home for the first time in over 50 years but age-old rivals Germany will be hoping to spoil the party for the home side.

After landing both Euro 2022 semi-final Bet Builders, including a huge 62/1 winner in Germany vs France, Alex Wrigley is back with another Ultimate Bet Builder for the grand finale on Sunday!

England have won ten of their last 11 matches inside 90 minutes and took the win in extra-time in their one failure to do so.

Sarina Wiegman, who won Euro 2018 with her native Netherlands, has already guided England to several records this tournament, including the biggest ever European Championship victory and the biggest ever semi-final victory.

Home advantage could play a crucial role at a packed Wembley and England can break their trophy duck.

Beth Mead has been the standout performer in a fantastic England side this summer and leads the Euro 2022 scoring charts heading into the final.

She has netted six goals across the five tournament games, failing to score in just one of them and taking her England tally to 20 goals in her 19 appearances since the start of 2021.

Lena Oberdorf to be shown a card

Germany midfielder Lena Oberdorf picked up a late booking to land my 62/1 Bet Builder against France and the 20-year-old now has three cards from four appearances at Euro 2022.

England have drawn bookings from their opponents’ defensive midfielders in two of their last four games, so Germany’s holding player could be in for another caution.

England have recorded an impressive 15 clean sheets in 19 games under Sarina Wiegman and they have conceded just two goals in their last ten games.

Their quarter-final clash with Spain is the only time they have conceded in this Euro 2022 campaign.