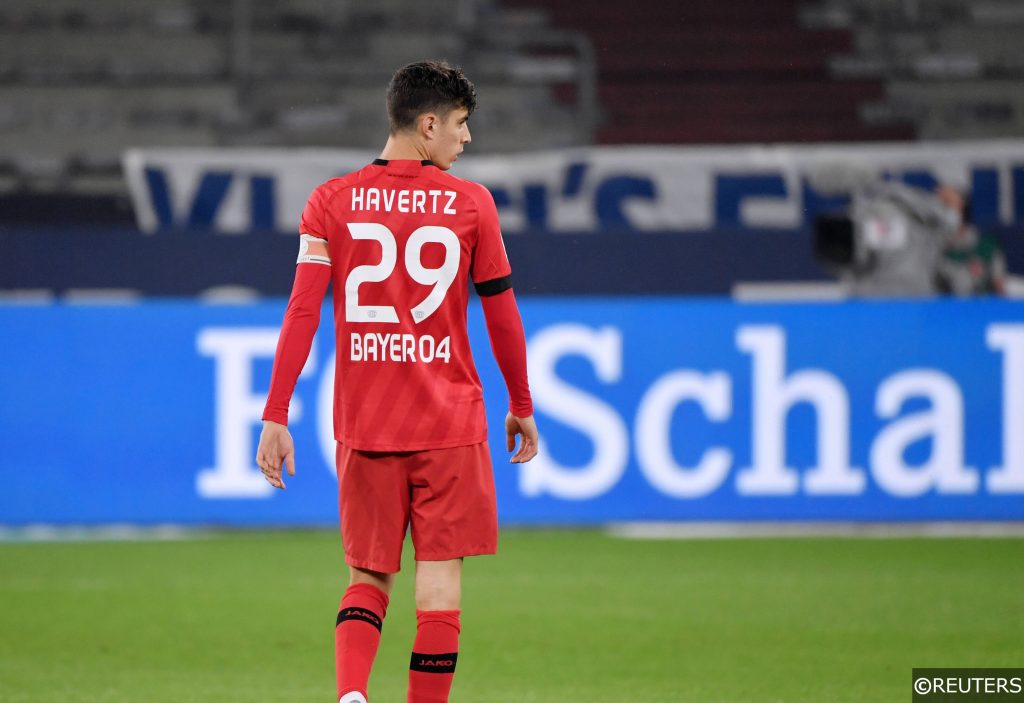 In-demand Bayer Leverkusen wonderkid Kai Havertz has been leaving a trail of stardust across Germany since the Bundesliga’s restart last month.

With five goals in as many games, the 21-year-old is on a one-man crusade to drag Die Werkself into Champions League qualification contention, and with Havertz’s influence on the rise a top four finish for Peter Bosz’s side looks probable.

It remains to be seen whether Havertz will be around the BayArena next season to experience the fruits of his labour however, with the playmaker a target for a lengthening list of major clubs around Europe.

Remember, you can also check out all our Bundesliga predictions and match previews for the week ahead here.

Leverkusen, for their part, are fully aware of the rapidly developing interest in their young prodigy, and they have been disarmingly open about their prized asset’s long-term future.

The club’s CEO Fernando Carro offered an update on Havertz’s situation earlier this week, and inferred that a solution that would keep all parties happy remains the target.

“I can see that many clubs are interested in him,” Carro told Kolner Stadt Anzeiger.

“You have to try to find a solution where the player’s goal can be reconciled with ours. At the moment nobody can say for sure what will happen.”

However, Leverkusen’s sporting director Rudi Voller recently said that the club retain some hope that they can hang on to Havertz a little longer. Speaking with DPA, the World Cup winner said:

“We have not given up hope that he will stay with us. We try to give him all the opportunities we can, so he can show his qualities. He has been outstanding in the second half of the season.”

Havertz features in our guide detailing the Football Manager 2020 wonderkids to buy when money is no object. Make sure to check out the article in full to see who else made the cut!

German international Havertz has enjoyed a fine individual campaign for Leverkusen in 2019/20, adding to the reputation he had built the season before where he bagged 17 goals and three assists in 33 Bundesliga starts for the club.

This term, the technically gifted attacking midfielder’s haul sits on 11 goals and five assists respectively, while his all-round performances have matured and jumped to new levels.

The Aachen-born trequartista, who swapped his home-town club for Leverkusen aged 11, is believed to have attracted major interest from Liverpool, Manchester United and Real Madrid, as well as Chelsea – who tied up a deal to sign Havertz’s compatriot Timo Werner from RB Leipzig earlier this month.

Further reports have emerged to suggest that Bundesliga league leaders and current champions Bayern Munich are in pole position to sign the highly-regarded midfielder, as the German giants prepare for a major squad re-tool over the summer.

Bavarian legend Thomas Muller certainly seemed keen on the idea of linking up with Havertz in Munich, saying: “In my last call-ups for the national team, I always enjoyed training and playing with him. He is a very good player, if not the best player of his age group in Europe at the moment.

“His skills are exceptional. Of course, we always want the best players at Bayern.”

Who can afford Havertz?

With a price tag rumoured to be hovering near £70m and the COVID-19 crisis having a severe impact on football’s finances, just a handful of clubs will be able to firm up their interest in Kai Havertz.

Chelsea, fresh from a reduced transfer ban, have money in the bank to play with having sat out the last two windows, but with attacking reinforcements already arriving in the form of Hakim Ziyech and the aforementioned Werner, Frank Lampard could choose to strengthen other areas of his team.

With Paul Pogba and Bruno Fernandes already on board, and a huge summer deal potentially in the pipeline for Jadon Sancho, Manchester United might feel that signing Havertz is overkill, with more pressing need for additions elsewhere, while Liverpool’s failure to push a deal for Timo Werner over the line hints at financial trouble at Anfield.

By a loose process of elimination, Bayern Munich look best placed to wrangle Havertz away from Leverkusen, and the club’s former captain Lothar Matthaus thinks his ex-employers will be in the running for his signature.

Matthaus told Sky Deutschland: “Havertz, who is sure to be hunted by the vast majority of clubs, should in my eyes have the character and quality to assert himself at Real, Barcelona, ​​Juventus or the top English clubs.

“Havertz has made a very good impression on me and that, paired with insane talent, means he has what it takes to show his class abroad. But of course, Bayern will also be a factor.

“It could also be an option to agree on the season after next, with Bayern allowing him to stay in Leverkusen for another year – especially if they qualify for the Champions League.

“Then Thomas Muller will be a year-and-a-half older and the prospects for Kai are even better than they are already. He will certainly cost at least €80 million, and only because of the current crisis. Otherwise we would be talking about a three-figure amount.”

Havertz has another opportunity to impress his suitors on Wednesday, when Bayer Leverkusen host Cologone in a winnable looking Bundesliga fixture at the BayArena.