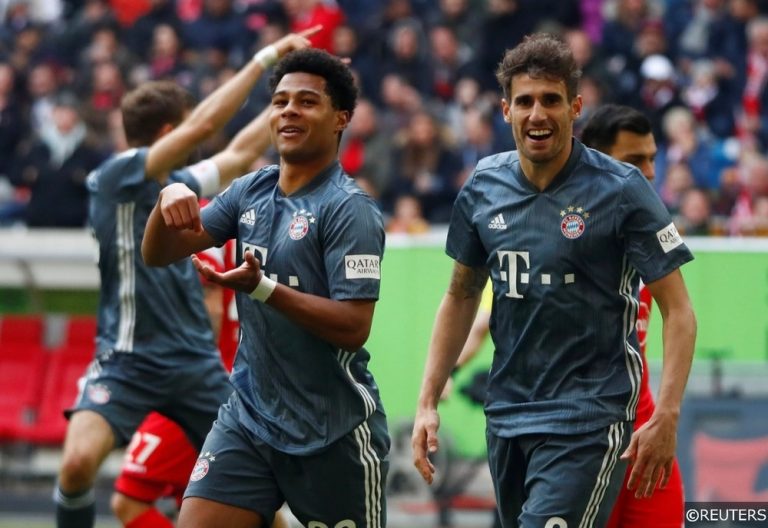 Fußball is back! The Bundesliga has been given the green light to resume this weekend and supporters have a full programme of German top-flight fixtures to look forward to on Saturday and Sunday.

With around a quarter of the 2019/20 left to run, plenty of crucial points and places are still up for grabs between now and the end of the season, setting up a thrilling climax to the domestic campaign in Deutschland.

The Bundesliga is perennially one of Europe’s most exciting elite divisions and Germany’s top-tier ranks among the most popular competitions around in betting communities.

Naturally, the Bundesliga is covered extensively by bookmakers who offer a huge array of markets, odds and specials for bettors to peruse every week.

With that in mind, we’ve put together some key Bundesliga betting stats to help you approach the rest of the 2019/20 season as a more informed punter.

With over 2.5 goals registered in a whopping 67% of the division’s total fixtures in 2019/20 so far, the Bundesliga once again ranks as one of the most goal-filled domestic leagues on the continent.

However, plenty of teams push well past that favoured bookmakers’ total goals line on a regular basis. Below, we’ve got all the data you need to know to attack the Bundesliga over 2.5 goals markets with confidence. 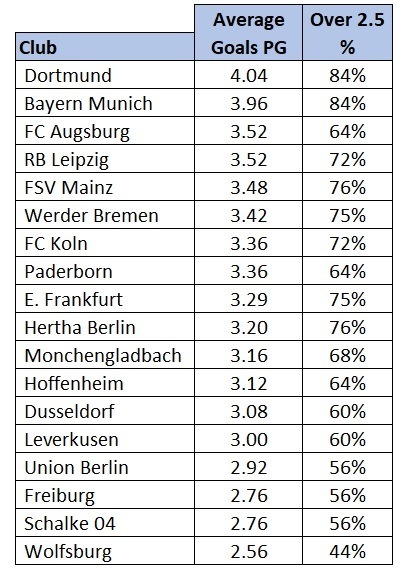 In terms of venue specific figures, the goals per game average from Borussia Dortmund’s home matches (4.25) is hard to beat, while Mainz’ games on the road have been similarly goal laden this term (4.25 goals per game on average).

Both teams to score (BTTS)

The both teams to score market is a often a favoured choice among bettors, and there are some prime candidates to choose from for your BTTS coupons in the Bundesliga. 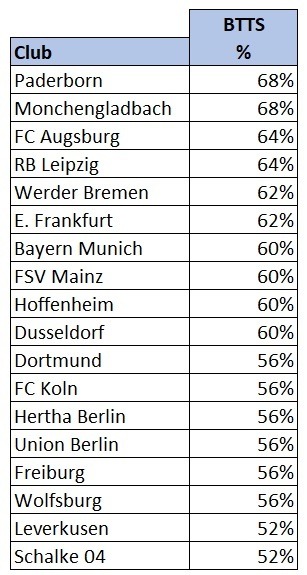 The corners markets are an excellent alternative to the more standard match results and goals wagers, with totals, handicap, race and many more corners options to choose from. A full five Bundesliga clubs have pushed past the 11.0 corners per game mark on average this season. 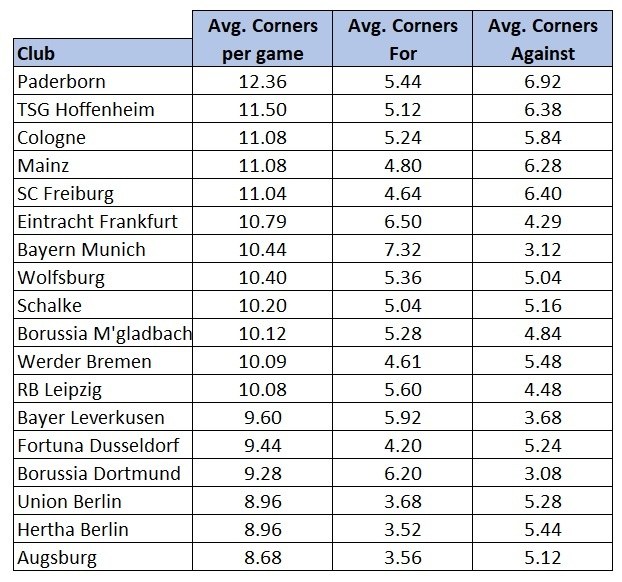 Using the data below, you should get a good idea of which teams are likely to land themselves in trouble with referees more than others. This information can be applied to the bookmakers’ Bundesliga card markets. 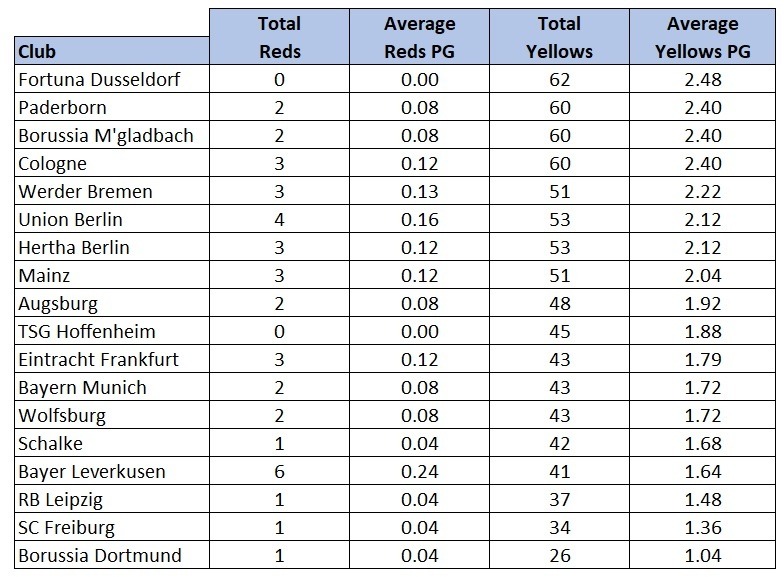 With more and more bookmakers adding individual player odds to their German football betting markets, getting a handle on the best performers in a number of key Bundesliga player metrics is a useful exercise. You can find a rundown of the some of the most useful player data for Bundesliga betting below.

It’s also interesting to note that Lewy has scored the first goal for the Bavarians on 13 separate occasions, marking him out as an excellent first goalscorer pick for Bayern’s Bundesliga contests. 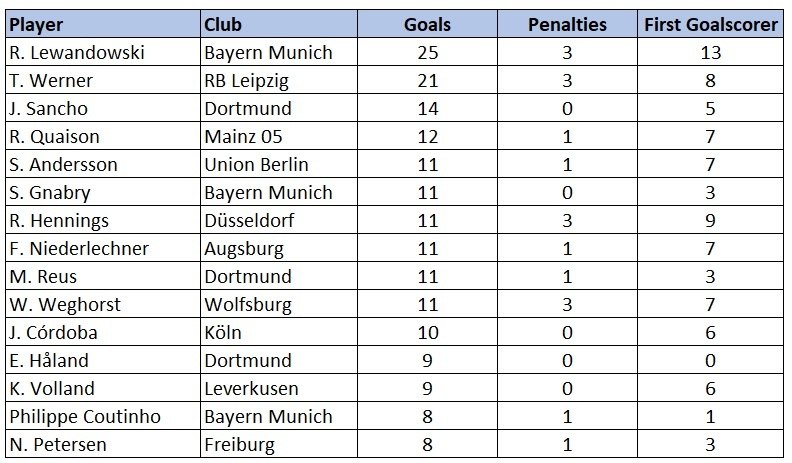 It’s interesting to note that eight of the 12 players listed below are defensive midfielders, where putting in tackles and disrupting attacks by any means necessary comes with the remit. 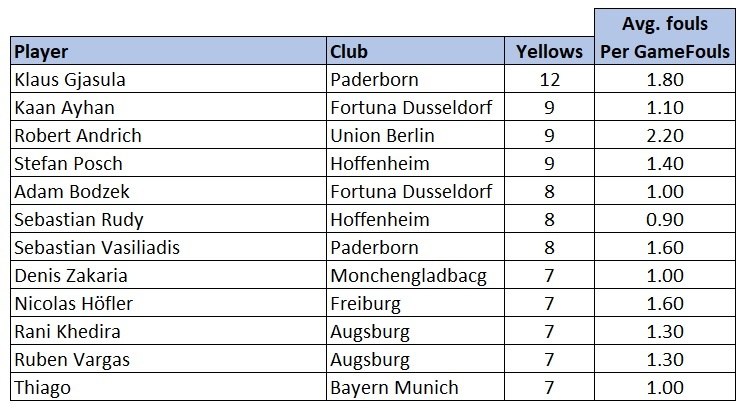 Thomas Muller has enjoyed something of a renaissance this season – something that has been reflected in his outstanding creative output for the campaign so far. Five of the top six assist providers in the Bundesliga this season come from the division’s top two, Bayern Munich and Borussia Dortmund. 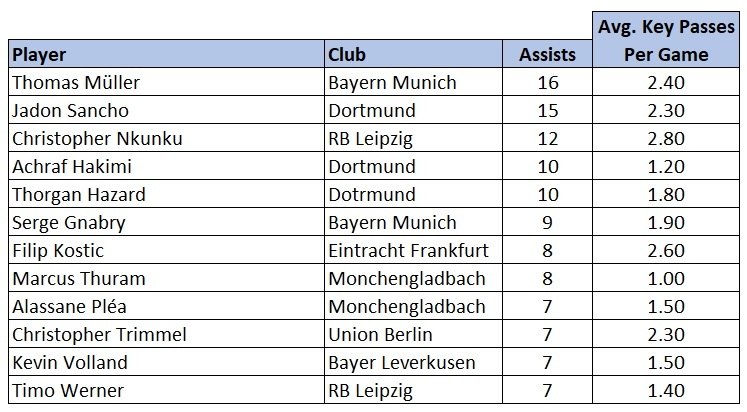 Both shots and shots on target markets are often made available by bookmakers who carry player specials for the biggest Bundesliga fixtures on a given weekend. Below, we’ve compiled a list of the most prolific players in the league in terms of attempts. Werder Bremen’s Niclas Füllkrug and Koln’s Mark Uth are both useful outliers to keep in mind for the shots on target markets. Both players are averaging 2.0 attempts on target per appearance in 2019/20.