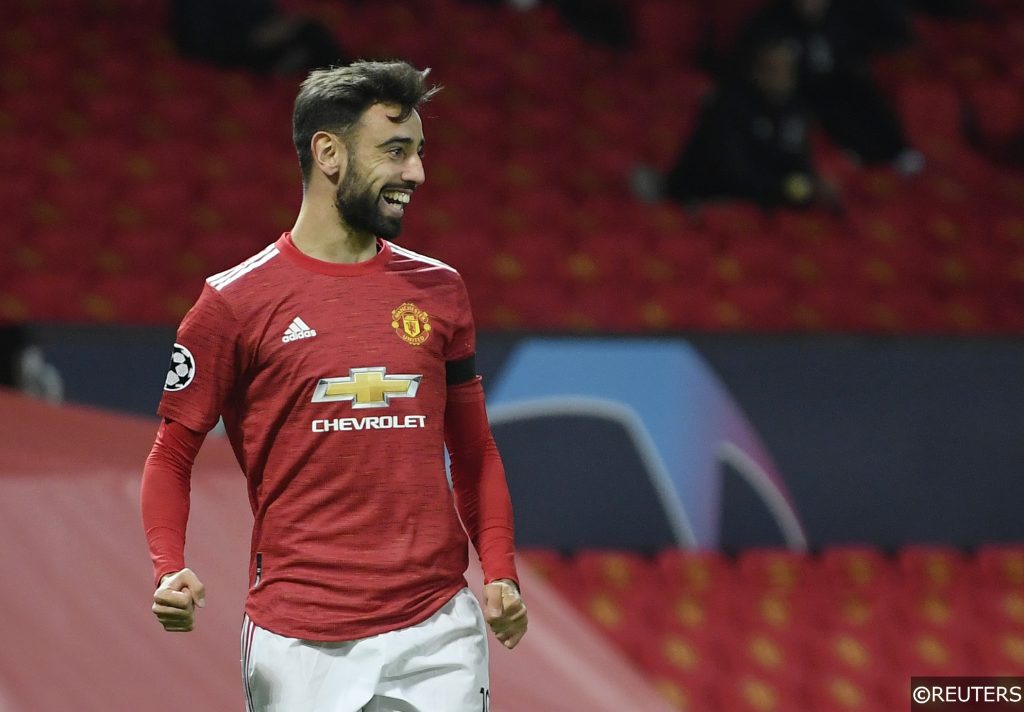 The Premier League is ramping up in intensity as we head further into the hectic month of December, and ahead of the first double gameweek of the 2020/21 season we caught up with FST Bet Builders host Statman Dave to get his view of some of the big talking points.

There’s plenty to talk about too, from the marquee clash of the weekend in Manchester to Tottenham’s unexpected title challenge and much more. Let’s take a look at what he had to say.

And remember to check out all our Premier League predictions and analysis ahead of this weekend’s games.

All eyes on Old Trafford

The fixture everyone is looking at coming into this weekend is the high-stakes Manchester derby at Old Trafford.

Ole Gunnar Solskjaer is once again under increasing pressure after being dumped out of the Champions League in midweek, but it’s not all sunshine and rainbows in the blue half of Manchester either. Pep Guardiola’s side find themselves down in 8th position heading into gameweek 12.

Victory for either of these sides would see them thrust into talk of a Premier League title challenge, while defeat could leave them in the bottom half of the table come Sunday.

Statman Dave is optimistic about the hosts’ chances, saying: “Ole Gunnar Solskjaer has a really good record in the derby. Let’s take last season as an example: in the four games Manchester United played Manchester City, Solskjaer won three out of the four.”

“He tried lots of different shapes and tactical strategies. We’re talking back threes, back fours, the 4-2-4-0 at the Etihad that worked so well, with Marcus Rashford wide, with Dan James wide, with Anthony Martial sitting a little deeper.”

“I think Solskjaer had strategies that really worked against Pep Guardiola, one of the best managers of all time.”

With just six points and a game in hand separating Manchester United from the top spot, there is no doubt there is potential for a shock title challenge.

Despite this, Solskjaer is a regular leader in the Premier League sack race and is almost constantly under scrutiny.

That boils down to their frustrating level of inconsistency, but a derby win could prove the turning point according to Statman Dave, who said: “If Manchester United win the derby they’ll very much be in the title race. Yes, the title race.”

“I’d consider Chelsea in the title race and if Manchester United win their game in hand they’d be on the same points as Frank Lampard’s Blues.

“Looking at Bruno Fernandes and his impact on the side: Since joining Manchester United he’s been involved in more goals than any other player at the club.

“Also looking at Mason Greenwood potentially being used as number nine with the current injury problems United have, he could be pushing United forward in terms of goals and assists.”

Jose Mourinho’s appointment at the Tottenham Hotspur Stadium came with a healthy dose of scepticism from the Spurs fans, but they’ve been well and truly converted this season.

Spurs head into this frantic period top of the Premier League after their assured 2-0 win in the north London derby, and with a win expected against Crystal Palace on Sunday they must be considered contenders in the title race.

The stats say Spurs can maintain their title challenge. Since the Premier League restart Spurs have won more points than any other club and if we’re looking in the past five games they’ve conceded just one goal against Brighton. Playing the likes of Man City, Chelsea and of course Arsenal.

“If they can get Gareth Bale fit, for me they’ll be title favourites.”

Pressure ramps up on Arteta

Arsenal may have sailed through their Europa League group, but Mikel Arteta has come under fire recently after a string of dismal Premier League displays.

The Gunners, who face Burnley on Sunday, have seemed bereft of ideas going forward and have scored just two goals in their last seven league matches, winning only once.

But Statman Dave doesn’t leave all the blame at Arteta’s door, saying: “For me Mikel Arteta isn’t a lost cause at Arsneal. He’s a manager that has shown in his brief spell that he can get the team playing really well. We’re looking at the FA Cup win, beating Manchester City and Chelsea on the way to lifting the trophy.

“The big thing is the player recruitment needs to change at Arsenal. Look, Mikel Arteta can’t play with the players he’s currently got in terms of creating chances. He’s missing that type of player. For me, in the summer Aouar should’ve been bought from Lyon instead of Thomas Partey from Atletico Madrid. Arsenal are stacked in defensive midfield but what they lack is a true creator at number ten.”