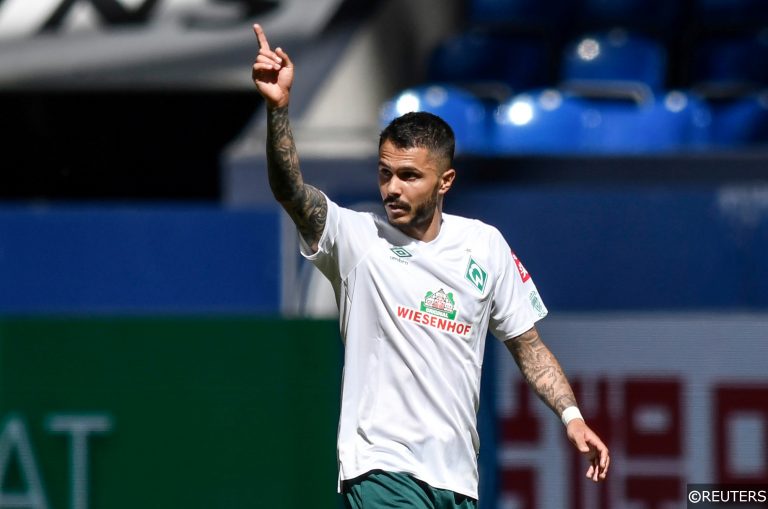 On Wednesday evening, second from bottom Werder Bremen host fellow candidates for the drop Eintracht Frankfurt at the Weser Stadium in what promises to be a tense Bundesliga relegation six-pointer.

Die Werderaner’s first demotion from Germany’s top-flight since 1980 had looked more certain than ever when they were battered 4-1 at home by Bayer Leverkusen last month, however, an unexpected spike in results, powered by successive away wins at Freiburg and Schalke, have renewed belief that a great escape might still be possible.

12th placed Eintracht Frankfurt also took advantage of the diminishing power of home advantage in the Bundesliga by claiming three crucial points late on at Wolfsburg on Saturday, and having beaten Bremen 2-0 in the reverse league meeting between the clubs last year, Die Adler will be aiming to compete the double over their hosts in Wednesday rematch to strengthen their own chances of staying afloat.

Below, we’ve listed some of the best player specials for this week’s crucial head-to-head.

If you’re on the look out for more Werder Bremen vs Eintracht Frankfurt predictions, check out our expert’s match preview and betting tips for the game.

Want to find out where you can watch or stream Werder Bremen’s game against Eintracht Frankfurt? Read our guide featuring all the latest team news to find out.

The ex-Hoffenheim and Koln star was Werder’s only goal scorer and match winner in two of their first three games back against Schalke and Freiburg respectively, doubling his tally for the entire 2019/20 campaign inside a productive three-fixture flurry.

Armed with his newly earned talisman-tag, Bittencourt’s confidence should be soaring ahead of Werder’s latest assignment against Eintracht Frankfurt, and with his teammates looking to him for inspiration again, he’s worth backing in the anytime goalscorer market.

Eintracht Frankfurt winger Filip Kostic has been enjoying a fine individual campaign for Die Adler this season, notching four goals and nine assists from his left-hand berth for Adi Hütter’s side overall since August.

However, as productive as the Serbian has been, he might find that he has his wings clipped on Wednesday by a Werder Bremen rearguard that has looked uncharacteristically robust since play in the Bundesliga resumed.

Die Werderaner are searching for their fourth clean sheet on the spin on Wednesday – a feat that’s made even more remarkable when you consider that they had kept their opponents out just once in 25 attempts before that.

Kostic averaged just 0.8 attempts on goal across his last five away appearances for Frankfurt, and we think he could struggle again to make an impact in the final third against a much more cementitious Bremen backline.

After blazing a trail through the first half of the 2019/20 Bundesliga season, Milot Rashica’s form had tailed off considerably in the lead up to the COVID-19 led postponement of domestic football in Germany.

Since the restart, the Kosovan winger has looked much more like his old self however, and after a sparkling display for Werder against Champions League chasing Gladbach on May 26, Rashica grabbed an assist in his team’s subsequent win at Schalke four days later.

That was the highly-regarded 23-year-old’s 5th Bundesliga assist of the campaign, and with his creative powers on the rise, we think the wide attacker can be Bremen’s defence splitter again on Wednesday.

Marco Friedl to get booked

Fond of a heavy tackle or three, Austrian fullback Marco Friedl is statistically Werder Bremen’s most ill-disciplined player this season.

While his 2.5 tackles per game average puts him joint top at the Die Werderaner for that metric in 2019/20, Friedl’s fouls per game figure of 1.2 doesn’t seem unreasonably high for a defender, though those numbers certainly suggest that when he hits, he hits hard.

In total, Friedl has collected a notable eight yellow cards for his numerous indiscretions this term and the tough-tackling former Bayern Munich youngster is among the prime candidates to be cautioned again on Wednesday.

Martin Hinteregger to get booked

Friedl could be joined in the referee’s notebook on Wednesday evening by Eintracht Frankfurt centre half Martin Hinteregger.

Hinteregger, who also hails from Austria, is Die Adler’s most carded player in 2019/20 having amassed 11 bookings in all competitions, six of which were picked up in the rough and tumble of the Bundesliga.

The 27-year-old was one of three players booked when Eintracht Frankfurt drew 2-2 with Werder Bremen in October last year, and with the visitor’s work load at the back expected to be heavy on Wednesday, the former RB Salzburg defender could land himself in trouble again.