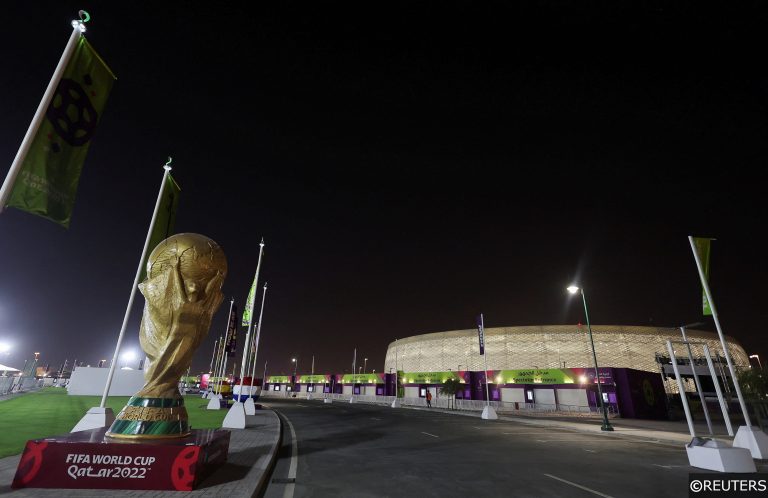 With just a week to go until the World Cup opening ceremony, our 12 days of Qatar series continues as we take a look at the 2022 tournament and the records which could be broken this winter.

We’ve already covered all the major outrights you could possibly need, from our World Cup outright winner predictions, to World Cup dark horses to watch and we’ve even got a massive 250/1 tip for the World Cup player of the tournament.

However, we’re not done with tips. On top of key tournament details and records, we have a couple of bets below, including one for the total number of goals scored in Qatar and a 5/1 selection backing another record for Lionel Messi!

Given the size of Qatar, this tournament has the fewest number of venues since Argentina ’78. That was a 16-team tournament, with the following 24-team and then 32-team editions all featuring at least nine stadiums. Qatar has reduced the number of venues to just eight, with each of the chosen stadiums all hosting at least one knockout game.

It’s a massive change from Russia in 2018, when teams were spread across time zones. This year, the biggest distance between two stadiums is 46 miles, less than the distance between Stansted airport and the City of London.

The smaller nature of this tournament is far removed from the 2026 edition, which is set to be spread across the USA, Mexico and Canada. That tournament sees the number of entrants expended to 48. Things get a little more complicated and convoluted from then, so enjoy this straightforward eight-groups-of-four version for the final time.

As for the weather, the temperature in Doha for the opening game on Sunday is around 28 degrees Celsius. The tournament was switched to November to avoid the summer spikes in temperature, but it’s still likely to be well above the 22 degrees recorded in London on the day of the Euro 2020 final.

How will the European teams cope in Qatar?

Until 2010, a European side hadn’t won a World Cup held outside Europe. Spain in South Africa and Germany in 2014 put that to bed, with things very different in the modern era given the speed of travel and the fact most top players reside in Europe anyway.

However, there is still some impact on European teams. The last three European World Cups (Russia ’18, Germany ’06, France ’98) have seen 10 of the 16 knockout spots claimed by UEFA nations. The previous three non-European ones (Brazil ’14, South Africa ’10, Japan/South Korea ’02) see that number reduced to only seven.

A glance at the odds shows that 11 European nations are backed to make the last 16, with Serbia and Wales the only two UEFA entrants not among the top two favourites to qualify from their respective groups.

The big factor this time around is that Brazil and Argentina look stronger now than they have at any of the last four editions – which were each won by European sides. They are ranked 1st and 3rd in the world respectively, while 14th-placed Uruguay feature as our outsiders. While Europe is 2/5 to produce the winner, the value could sit with South America.

Mario Gotze’s winner for Germany against Argentina in Brazil levelled that 2014 tournament with 1998 as the highest-scoring in World Cup history. Recent years have seen the total goals trend upwards thanks to additional games.

The current record is likely on borrowed time, with the 2026 finals expected to see around 80 matches played. However, the earlier, shorter tournaments seem more entertaining overall. No recent tournament can match 1954’s incredible average of 5.38 goals per game. Compare that to 1998 and 2014 – which saw 2.67 goals per match.

Russia 2018 clocked in a shade below, with 169 goals scored across 64 games. With players in theory in mid-season fitness rather than dealing with end-of-season fatigue, another 166+ goal tournament looks likely.

Given the goals-per-game average of Switzerland ’54 it’s not a shock that the tournament boast the highest-scoring game in history. The hosts were beaten 7-5 by Austria in an incredible game. It’s hard to see a 12-goal thriller in Qatar in 2022, but we can dream!

Klose scored 16 goals in 24 World Cup games, scoring at four tournaments between 2002 and 2014. He departed a World Cup winner in Brazil and his record for goals at the tournament is likely to be around for a while.

The German forward broke Brazilian Ronaldo’s tally of 15 goals in Brazil, with Ronaldo setting that just eight years earlier. The closest active player is Thomas Muller on 10 goals, but he would need a standout tournament to even get close to Klose’s record.

Now here is a record which could be broken in Qatar. Diego Maradona has made more assists at the finals than anyone else. There is some dispute over this given that records weren’t kept during Pele’s peak, but Maradona’s eight remains the tally to beat, for the time being at least.

Lionel Messi has five to his name and he’s heading to Qatar having made 14 assists for PSG in all competitions this term. He could well match his countryman, if not better him.

We’ve backed Argentina to have a deep run in Qatar, which offers plenty of chances for him to get the three assists he needs. Given that no player has made more than four assists at each of the last six tournaments, you can effectively back Messi to break the record at 5/1 by backing him to top the assists chart in Qatar.