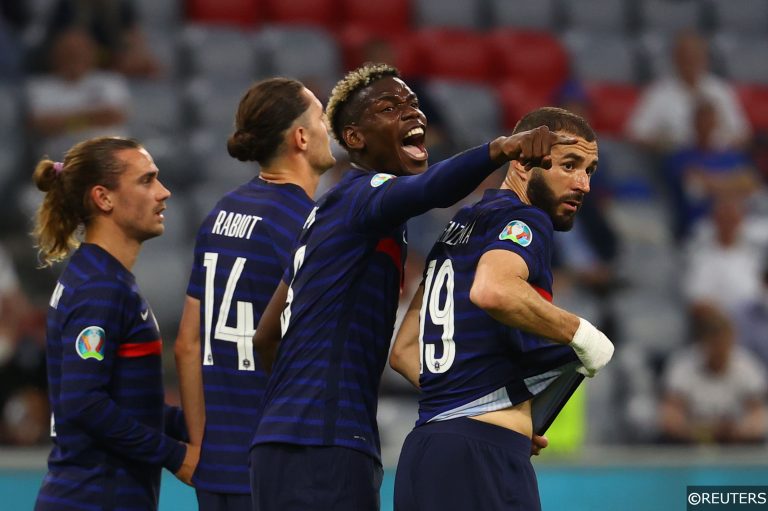 With England safely through to the knockout stages we can all relax for a few days and look forward to the culmination of Groups E and F tonight.

With Spain, France, Portugal and Germany all in action it promises to be an evening of high-quality football, and here I’m focusing on one of the up and coming betting markets as I delve into the shot stats.

Let’s take a look at all the best shots and shots on target bets for Thursday’s Euro 2020 action.

He has attempted at least three shots in six of his last eight competitive games for club and country so backing him to do so again looks juicy at 4/6.

Poland need to go on the offensive but despite the presence of Robert Lewandowski they have been lacking so far. They have only hit the target five times so far in Euro 2020 and tested the keeper with just 17% of their shots against Slovakia. I’m taking them for under 4.5 shots on target at 8/13.

Sticking with the unders market, Slovakia are generously priced at 8/13 for under 2.5 shots on target. The underdogs have managed only two shots on target in Euro 2020 so far and both came against a poor Poland side on matchday one. Spain are yet to win but in their two matches they have allowed their opponents just nine shots in total, with only three of those hitting the target.

After an dreadful night in front of goal against Sweden, Alvaro Morata finally managed to get on the scoresheet against Poland and the Spain forward certainly hasn’t been deterred from having a crack at goal. He has had seven shots so far in Euro 2020 and faces a Slovakia side that have allowed their opponents 30 shots on goal across their two games. At 1/1 for over 3.5 shots, I’m backing him tonight.

Cristiano Ronaldo has been stealing the plaudits for Portugal but teammate Diogo Jota offers the most value for the Portuguese. He has had three shots on target in his two games so far and has only failed to hit the target in one of his last seven competitive games for club and country, which was when he came on in the dying embers in the final game of the Premier League season. He looks a solid shout at 8/13 to hit the target at least once.

Paul Pogba is also worth backing in the over 1.5 shots market at 5/4. The French midfielder has had three attempts on goal in Euro 2020 and has had nine shots in his last six competitive appearances. Pogba certainly isn’t shy when it comes to having a crack at goal and comes up against a Portugal defence that were mauled at the hands of Germany last time out.

Only Spain (9) have allowed fewer shots on their goal than Germany (11) this tournament and that doesn’t bode well for Hungary considering the quality of their opposition in those two games. Hungary managed five attempts on goal in their opening two games so backing under 6.5 Hungary shots at 4/5 is attractive.

On Germany’s side, Kai Havertz emerged as a key attacking threat against Portugal. The Chelsea youngster had four shots on goal in that game and has attempted 18 shots in his last eight competitive games for Chelsea and Germany. The only game he didn’t have a shot in this period was in a 16-minute cameo in the FA Cup Final, so backing him at 8/11 to have over 2.5 shots is my preference.