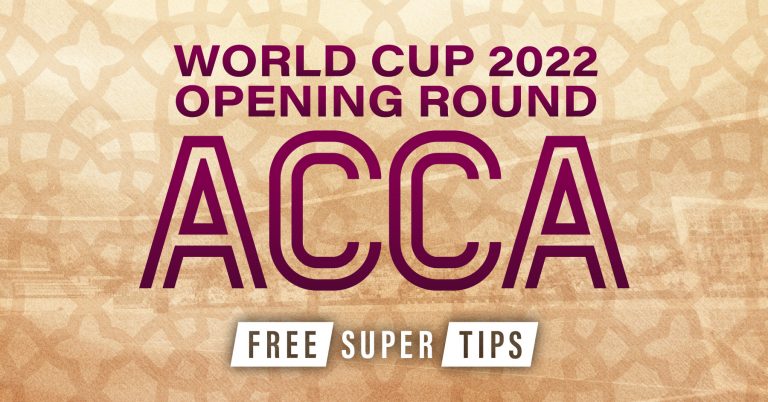 Now that we have all the major World Cup outright tips covered, next up on our countdown to Qatar we’re taking a look at the individual fixtures taking place across round one of the Group Stage.

Of course, we have in-depth analysis for every single match over one our World Cup predictions page, but here I am going to round up my favourite pick from each group and combine it into one massive 63/1 accumulator.

Group A – Netherlands to win (vs Senegal)

Senegal may be the champions of Africa but without star player Sadio Mane, who has been ruled out of the first game at least, they are likely to struggle against the in-form Netherlands.

Louis van Gaal’s side head to Qatar unbeaten in 15 games and have won 11 of those, including impressive victories over Denmark, Belgium (twice) and Poland. They can kickstart their World Cup campaign with three points on Monday.

It’s expected to be a straight shootout between USA and Wales for second position in Group B and USA can strike the first, and potentially deciding, blow on Monday.

They have the youngest squad in the tournament and an extremely solid defence that should be well equipped to deal with the Welsh counter-attacks. Wales, slight underdogs in this tie, have lost four of their last five games and could make it five from six in Al-Rayyan.

Group C – Argentina to win to nil (vs Saudi Arabia)

Argentina are my top picks for the World Cup this winter and they should have no problems getting off to a flying start against Saudi Arabia.

They are unbeaten in an incredible 35 games stretching back over three years and they have kept clean sheets in six of their last seven. Underdogs Saudi Arabia have failed to score in all three clashes with South American sides this year and could be on the end of a thrashing on Wednesday.

Denmark were the fairytale side of Euro 2020 and while another semi-final run could be a stretch they shouldn’t have any issues getting three points against a Tunisia side that have lost nine of their 15 World Cup games.

The Danes have scored at least twice in six of their last eight games and have beaten reigning world champions and Group D rivals France twice during this period. With Tunisia shipping two or more in five of their last seven World Cup ties, expect the favourites to bag a couple.

Group E – Spain to win to nil (vs Costa Rica)

Costa Rica have pulled off some of the most extraordinary upsets in World Cup history but they are unlikely to repeat that feat in Doha on Wednesday.

Spain have won seven of their last ten games heading to Qatar and have kept clean sheets in five of those victories. Costa Rica have failed to score in three of their last four World Cup ties.

It’s been a long wait for Canada to return to the world’s biggest stage but they are unlikely to have a good time of it against Group F favourites Belgium.

They failed to score a single goal and lost all three games in their only previous World Cup appearance back in 1986 and they have lost to Honduras and Uruguay in their last four outings. Belgium won six of their seven games in the 2018 World Cup and they haven’t lost to a non-European side since a slender defeat to Argentina in the 2014 World Cup.

Serbia’s last World Cup fixture was a 2-0 loss to Brazil four years ago and the tournament favourites are expected to inflict another defeat on the underdogs on Thursday.

Serbia lost two of their three group games in Russia and now come up against a Brazil side in sensational form. They haven’t lost a game since their Copa America Final defeat to Argentina last year and have won 12 of their 15 matches since, scoring 38 goals and conceding just five.

Uruguay are our dark horse picks for the World Cup and they can get off to a flying start against a South Korea side that have won just one of their last nine World Cup ties, losing six of them.

Uruguay have an extremely talented squad that seems to be flying under the radar a bit, with Edinson Cavani, Luis Suarez, Darwin Nunez, Rodrigo Bentancur, Federico Valverde and Jose Gimenez among them. They won all three group games in 2018 and only came undone against eventual winners France.

Win up to £1 million with bet365’s Tournament Predictor