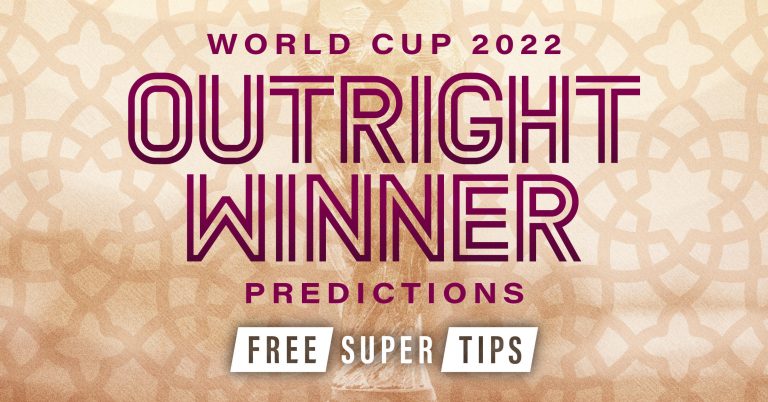 To kick off our 12-day countdown to the 2022 World Cup, we’re looking at the frontrunners to lift the famous trophy.

The tournament has been dominated by European sides of late, with Italy, Spain, Germany and France winning the last four. Will the South American sides strike back, or could England add to the European streak?

Below you can see our main outright selections to lift the trophy in December, while you can get more tournament analysis and tips over on our Qatar World Cup 2022 predictions page.

While South American sides haven’t won the World Cup in 20 years, the continent’s two giants are the favourites in Qatar. Both Brazil and Argentina went unbeaten through South American qualifying, putting them ahead of the rest.

After that, it’s the last three winners of the tournament and Euro 2020 finalists England. France are third-favourite, but retaining the trophy hasn’t been done in the modern era.

Gareth Southgate’s side have wobbled with their recent form, but there’s clearly still plenty of support for them to succeed in Qatar as they head to the tournament as fourth-favourites following their fourth-place finish in Russia in 2018.

South American sides have had a tough 20 years in this competition but no side came closer than Argentina in 2014. After their agonising final defeat in Brazil, they slumped to a last-16 exit in Russia four years later.

However, the side heading to the 2022 edition looks set to give Lionel Messi his best chance of taking home the trophy. They went through South American qualifying unbeaten, winning eight of their final 11 games to book their spot at the tournament.

That good run followed their Copa America success in 2021. They lifted their first international trophy with Messi in Brazil last year, their first trophy since the 1993 Copa America.

Lionel Scaloni has made Argentina strong at the back, having conceded just eight times through 17 games in qualifying. They proved themselves once again with a 3-0 victory over European champions Italy earlier this year, while Messi has stepped up his form with PSG this season.

The superstar has excelled in Ligue 1 this term and he leads a frontline which includes Inter’s Lautaro Matinez. Man City’s Julian Alvarez can also make an impact off the bench, so they’ve got an impressive forward line on top of a solid defence.

They’ve found a great balance and with trophy-winning experience, Argentina are the side to beat in Qatar this year.

After missing the 2018 edition, the Netherlands are hoping to emulate France in 1998 by winning the trophy in their return. The Dutch exited in the first knockout round at Euro 2020 last year, but they won their first three games before Matthijs de Ligt’s red card led to a 2-0 loss to the Czech Republic.

That defeat led to the sacking of Frank De Boer, who had a questionable record in charge. They’ve restored Louis van Gaal as national team boss after he led the Dutch to the last four in Brazil in 2014.

During his first reign van Gaal lost only two of 29 games in charge, while he’s unbeaten through his first 15 games this time around, winning 11 times.

In 2022, the Dutch have won six of their eight games including home and away victories over a talented Belgian side. That marked them out as serious contenders at the 2022 World Cup, especially following the draw.

The Dutch swerved the top teams from pot 1 when they landed hosts Qatar. Senegal are their biggest rivals in Group A, with Ecuador unlikely to be much of a threat. There’s a great chance for the Dutch to build up some momentum, especially with Wales or the USA set to meet them in the last 16.

The Dutch have a scoring threat through Memphis Depay and Cody Gakpo, Frenkie de Jong controlling the midfield and de Ligt and Virgil van Dijk in defence. With an experienced, successful coach leading them the Dutch look great value to lift the trophy at 12/1.

To squeeze every drop of value out of today’s Football Predictions including our World Cup 2022 Betting Tips we highly recommend you take a look at our Free Bets hub, where you can compare all the best free bets and special offers from the best sportsbooks around.