Los Angeles Rams vs Baltimore Ravens Picks, Predictions and Betting Tips for the Monday Night Football showdown from the Los Angeles Memorial Coliseum. Can the Rams stop the Ravens from picking up their 7th straight win? Read on for all of our free NFL picks, tips, and predictions! 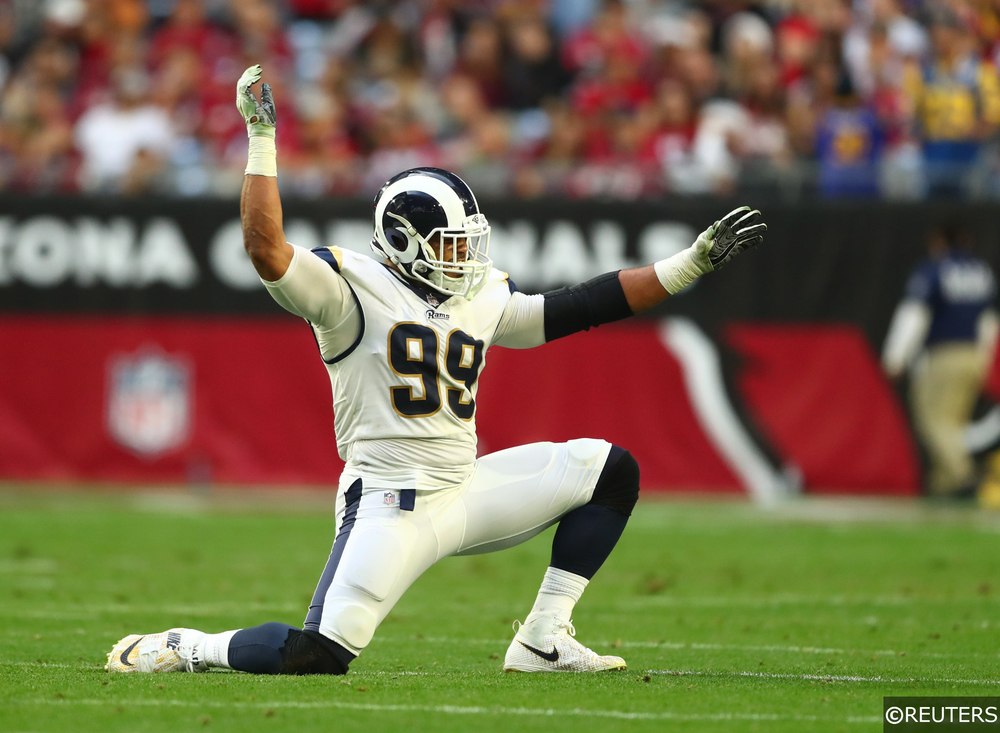 This week’s edition of Monday Night Football features an inter-conference matchup between the 8-2 Baltimore Ravens and the 6-4 Los Angeles Rams at the Los Angeles Memorial Coliseum. The leading MVP candidate Lamar Jackson will face one of his toughest tests yet as he faces off with a Rams’ defense that ranks 3rd in run defense efficiency.

Baltimore is coming off another impressive win this past weekend as they took down the Texans by a score of 41-7. The Ravens dominated this one on both sides of the ball as the offense dominated on the ground and the defensive got plenty of pressure with its pass rush. QB Lamar Jackson finished with 222 passing yards, 4 passing TDs, and 86 yards rushing to go along with RB Gus Edwards’ big day of 8 carries, 112 yards, and a touchdown. Edge rusher Matthew Judon led the defense with his constant pressure which included an early forced fumble.

Los Angeles is also coming off of a victory but it was a much less impressive 17-7 win over the Chicago Bears. The story of this one was the Rams’ pass rush, as the group led by DT Aaron Donald was consistently winning their matchups with the Bears’ offensive line and getting pressure in the Chicago backfield. The Rams’ offense wasn’t overly impressive but QB Jared Goff did settle in after throwing an early interception.

With all things considered, we have full confidence with the under in this matchup. Both of these teams are coming into this one with defenses that have been playing great in recent weeks and we think that will be the dominant side of the ball in this game. The Ravens are last in pace in the NFL and will keep the clock running with their dominant running game, but they will have some resistance from a Rams’ defense that ranks 10th in weighted DVOA defense and 3rd in DVOA run defense.

On the other side, the Rams’ offense has been suspect all season long and now will have to face off against a Baltimore secondary that ranks 3rd in DVOA pass defense and has been incredible since picking up CB Marcus Peters. Baltimore will lean heavily on the run but will have to battle with a great Rams’ run defense while Jared Goff and the L.A. offense will have to try and move the ball against a great Ravens’ secondary, so we think the strength of each defense will be enough to keep this game under the points total.

In terms of the spread, we like the Rams to cover the spread in part because of one of their key defensive players: LB Cory Littleton. The Ravens have been rolling and do have an incredible offense, but none of the teams they’ve played have had a linebacker that is as good in coverage as Littleton. The off-ball linebacker ranks 2nd among all defensive players in coverage with his 90.4 Pro Football Focus coverage grade. Littleton’s speed and athleticism offer the Rams a suitable option to spy and defend Jackson when he tries to take off on the perimeter.

On the other side, the Rams should be able to capitalize on a Ravens’ run defense that has really struggled this season, ranking just 25th in DVOA run defense. We think the Rams will be able to stay within this number given some favorable offensive matchups and their ability to stop the run.

WR Brandin Cooks has been upgraded to probable despite his concussion concerns.