Carolina Panthers vs Tampa Bay Buccaneers Picks, Predictions and Betting Tips for the Thursday Night Football showdown at Bank of America Stadium. Will the Panthers bounce back from their tough loss last week? Or will the Bucs pick up their first win of the season on a short week? Read on for all of our free tips, picks, and predictions! 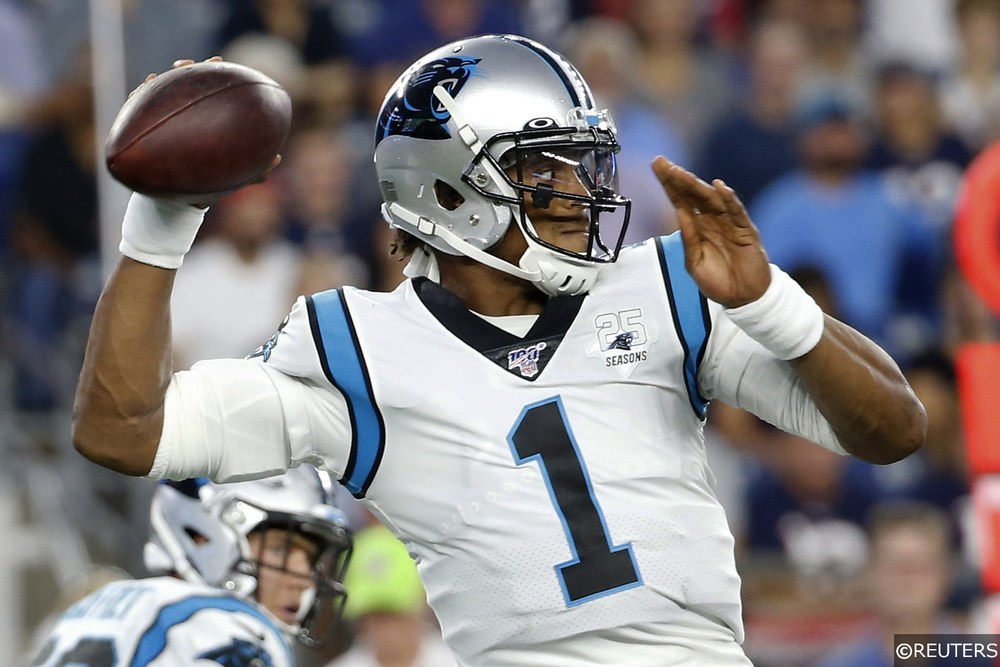 This week’s edition of Thursday Night Football gives us two teams looking to pick up their first win of the season as the Tampa Bay Buccaneers head down to Carolina to face the Panthers. Both sides are coming off tough home losses, but the Panthers have the benefit of not having to travel on a short week.

Carolina fell short to the Rams this past weekend 30-27 as their second half comeback came up short. QB Cam Newton struggled throughout the game with his accuracy, but thankfully RB Christian McCaffrey picked up the slack. McCaffrey scored twice and racked up 209 total yards both between the tackles and catching passes out of the backfield. The defense was able to get some pressure on Rams QB Jared Goff in the second half, but otherwise it was an up-and-down game for the unit.

The Buccaneers had similar problems in their first game of the season as well. QB Jameis Winston was horrible with both his accuracy and decision making, leading to three interceptions and some horrible missed throws to open receivers. On the other side of the ball, the defense was able to hang around in the first half and stuffed the run really well. There was a little drop off in the second half, but overall it was a more impressive performance than expected considering they are regarded as one of the worst defensive units in the league.

When we look at this matchup, we think there are favorable sides to take on both the spread and total. First, we like taking the Panthers on the point spread since we can get them with the hook on the favorable side of the key number of 7. Carolina should be able to take control with McCaffrey leading their ground game and the Bucs are going to have a tough time containing him not only between the tackles but also catching passes out of the backfield. The Bucs’ defense is young and prone to inconsistency, so we don’t trust them against a solid Carolina offense on the road on a short week. On the other side, it hard to trust Bucs QB Jameis Winston at the moment given his accuracy issues. Newton didn’t play either last week, but the difference lies in the fact that the Panthers can lean on their other offensive talent to pick up the slack, while the Bucs need their offense to flow through Winston. He’ll have trouble finding open receivers against the Panthers’ solid coverage group and will most likely turn the ball over trying to force big plays down the field.

Along with the Panthers, we like the under in this contest as well. Both offenses are going to rely heavily on their running games after seeing how their quarterbacks performed last week, which should lead to long drives and a continuously running clock. As touched upon earlier, both quarterbacks struggled mightily with control and accuracy last week and this is not just a quick fix that can be adjusted in a couple of days. We are expecting plenty of missed throws and poor decisions from both quarterbacks and this should work well to limit the potential of both offenses. Coach Bruce Ariens will look to calm Winston down and give him easier throws to make, which should limit the exposure we have to big play possibilities.

K Graham Gano (knee) is on Injured Reserve and out for the season.

CB Ryan Smith (suspension) is out for Thursday’s contest.